A young girl from Florida was struck by a bull bison and sent flying into the air at Yellowstone National Park on Monday. The girl did a complete flip before falling to the ground. 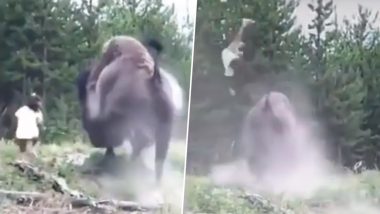 A young girl from Florida was struck by a bull bison and sent flying into the air at Yellowstone National Park on Monday. The nine-year-old who was with a group of people was injured in the attack. The incident happened at Old Faithful Geyser area of the park in Wyoming. The horrific video of the incident which is going viral shows the girl standing five to 10 feet within the bison when it runs towards her and strikes her. In the video, two adults can be seen running away as the bison comes charging towards them. The girl did a complete flip before falling to the ground. Two Curious Men Poke Furry Mysterious Hibernating Animal in a Mexican Cave & It Erupts Into Thousands of Spiders Nesting (Watch Video)

18-year-old Hailey Dayton who captured the incident on camera told NBC News, "My brother and I were looking at the hot springs, and we saw a bunch of people running down the path to the bridge. We saw through the trees some people petting the bison, super close." The national park in a statement said that the group consisted of 50 to 60 people, who were gathered near the bison for about 20 minutes before "causing the bison to charge". The park service, however, did not specify what caused the animal to behave that way. 75-Year-Old Florida Man Fights With Alligator to Save His Pet Dog!

Here is the Video: (Graphic content ahead, viewer discretion advised)

The park said that the girl who suffered minor injuries from Odessa was taken to a clinic in the park and was released later. Park officials warned visitors to stay at least 75 feet away from all large animals. According to an August 2018 estimate, Yellowstone is home to 4,527 bison. A male bull weighs upto 2,000 pounds and can run upto 30 miles per hour. According to the park's guidelines, people are asked to stay at least 25 yards away from bison. The incident is currently under investigation.

(The above story first appeared on LatestLY on Jul 24, 2019 05:30 PM IST. For more news and updates on politics, world, sports, entertainment and lifestyle, log on to our website latestly.com).