As per reports, one of the baratis rushed to the police station and informed them about the incident after which police reached the spot and freed the 'baraatis'. 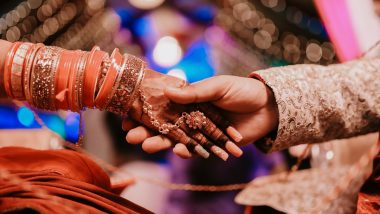 Bhopal, Feb 23: A woman in Madhya Pradesh's Rewa district refused to marry the bridegroom, right in the middle of the wedding rituals, citing his mental condition. Not only that, the bride's family members even allegedly beat up the bridegroom and the 'baraatis' after taking them hostage.

A video of the incident has gone viral in which the bridegroom is being seen being dragged by hair. His side alleged that the bride's family took them hostage and beat them up following a dispute. Surat Witnesses Bizarre Twist in Wedding Tale! Groom's Father Elopes With Bride's Mother, Marriage Called Off.

The 'baraat' from Manikwar village had arrived at Vanpadhar village under Mauganj police station area. Amidst the matrimonial rituals, a dispute erupted over the behaviour of 'baraatis' and the girl refused to get married.

According to the police, the girl raised questions on the boy's mental status and refused to marry him. The dispute erupted after some of the 'baraatis', during a traditional ritual in which the groom's relatives throw 'batasha' (a kind of sweet) on the bride's relatives, allegedly misbehaved with women of the other side.

The dispute escalated and the girl's relatives allegedly started beating the 'baraatis'. Video of the bridegroom and his companions being beaten has gone viral on social media.

As per reports, one of the baratis rushed to the police station and informed them about the incident after which police reached the spot and freed the 'baraatis'.

Additional Superintendent of Police, Shiv Kumar told reporters that the girl's family members alleged that the boy was behaving "improperly" during the rituals. It was also alleged that the boy's family hid the fact that his "mental condition is not good". There was a dispute over this and the marriage did not take place. At the same time, the boy's father accused the bride's family of taking them hostage and beating the 'baraatis'.

(The above story first appeared on LatestLY on Feb 24, 2022 11:03 AM IST. For more news and updates on politics, world, sports, entertainment and lifestyle, log on to our website latestly.com).