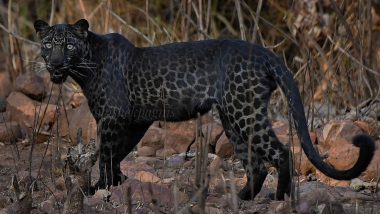 Did you know black panthers have dark spots hidden in their fur? A picture is now going viral on social media that shows a black panther from the Tadoba Andhari National Park in Maharashtra. What really caught the netizens’ eye was its black spots. Remember the Black Panther, ‘Saya’ from Karnataka? Its majestic dark colour just mind-blown the animal lovers across the nation. Now another picture is going viral that beautifully captured the panther spots in the animal. Yes, the animal’s body is typically covered in black dots. Because of the excess black pigments, which is called ‘ghost rosettes,’ the spotted marks in the black cats are hidden. This incredible viral image managed to capture the hidden dark spots, hidden in the dark fur of the melanistic black cat. And that is how the Black Panthers, actually look like, in real. From Kabini Forest in Karnataka to Tadoba in Maharashtra, 5 Wildlife Sanctuaries in India to Spot the Elusive Black Panthers.

Twitter handle, Wild India, which often shares videos and pictures from the wildlife, shared the image of the Black Panther. The Panther was captured by wildlife photographer Abhishek Pagnis. We are all mesmerised just as you are. Not many know that there are hidden spots in the black cats, called ghost rosettes. The spotted markings are present in the leopards, but are not seen because of the animal’s fur is so dark. It is because of the dark-coloured pigment in the skin, that black panthers are one of the melanistic animals from the wild. Black Panther Saya Captured With His Partner Leopard Cleopatra in India's Kabini Forest by Wildlife Photographer Mithun H, View Rare Pic of 'The Eternal Couple'.

“#Bagheera from Tadoba. This is how actually the melanistic leopard looks like. Rosettes are clear when looked from close. This beauty captured by @abhishek_pagnis,” Wild India captioned the picture of the majestic animal. The photographer on his Instagram page shared his story, when he clicked the panther at Tadoba.

#Bagheera from Tadoba. This is how actually the melanistic leopard looks like. Rosettes are clear when looked from close. This beauty captured by @abhishek_pagnis. pic.twitter.com/eOygYfCzwp

Another Pic of the Black Panther by Photographer Abhishek Pagnis

Isn’t it beautiful? Pictures of rare majestic animals often make rounds on the internet, and we cannot be thankful enough to the wildlife photographers for capturing such beautiful experience from the wild. It is pictures like these that remind us nature is so mesmerising and we are responsible for preserving it.

(The above story first appeared on LatestLY on Jul 27, 2020 12:56 PM IST. For more news and updates on politics, world, sports, entertainment and lifestyle, log on to our website latestly.com).