Cat With 4-Inch Legs, Manchester, is A Hit on Instagram and We Have Added This Ridiculously Adorable Tuxedo Cat to Our List of Favourite Animals on Internet (View Pics & Videos) 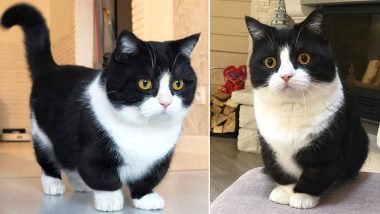 Manchester, an adorable cat is garnering attention on social media platforms for its unique look. Its short legs have made it popular on Instagram with over 60,000 followers. Manchester is a mixture of a Scottish Straight and a Munchkin, a breed known for their little legs. But Manchester doesn't feel he is shorter than the rest of cats and is quite happy. Also, he can catwalk like a pro! However, his online fame has not stopped him from doing his daily activities. The two-year-old tuxedo cat spends his day sleeping, playing, and of course sometimes gives Alexander a tough time, like any other pets. International Cat Day 2020: Twitterati Share Purrfect Pictures And Videos of Cats Celebrating Their Pets.

Manchester lives with his human, 36-year-old Alexander Ushakov in Moscow, Russia. Alexander told Metro, "Manchester was born on September 15, 2018, and I bought him at the age of four months." And if you have been wondered where he got the name from, here's what Alexander said, "I decided to call him Manchester in honour of the Manchester United football team as I have been a fan of them since 1998." Cats in Dreams Explained: Know The Meaning and Interpretation of Seeing Cats in Your Sleep.

Manchester Posing For His Followers:

Being The Saviour For a Day!

Talking about the cat's nature, Alexander said, "Manchester is very playful and vociferous. He is always meowing, loves playing mad games, and is always running around the house. He always wants to be played with and we love him very much." He added, "So many of his followers message me with support and love and regularly share his snaps with their friends. That’s what motivates me to continue sharing his photos and videos with followers."

(The above story first appeared on LatestLY on Aug 14, 2020 07:59 PM IST. For more news and updates on politics, world, sports, entertainment and lifestyle, log on to our website latestly.com).