Chameleon Changes 7 Colours in 3 Minutes! Old Video From Madagascar Going Viral is a Reminder of Amazing Wonders of Nature 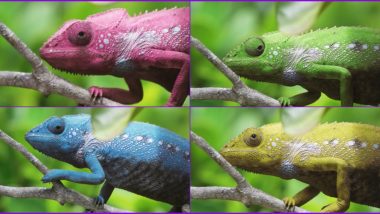 Ever since we learnt of chameleons we think of their colour changing abilities. That property has given rise to several proverbs too. And you must have seen of them changing colours to match the tree barks, but even seen a chameleon display bright colours as a rainbow one after another? An old video reportedly taken in the Madagascar is going viral on social media. It shows the creature changing not one but seven colours. Wait, there's more, all of it under 3 minutes! The old video is going viral on social media sites like Twitter and Facebook. It is a reminder of one of the wonders of nature. Rare Chameleon Species Rescued in Odisha, View Pic.

Chameleons are best known for their colour-changing abilities and if you are a careful observer than you can see that transformation if you see them for long. But usually turning into colour of the leaves or a bark, it is rare to see them take form in bright colours. Now an old video is being shared online with credits to person named Vikram Ponappa from Bangalore. The video is being shared on wildlife interest pages on Facebook as well as on Twitter and it is going viral. The chameleon adapts colours from a pink to red. It then changes to orange, green, yellow to a blue and brown all so quick within barely three minutes. It is almost unbelievable to see it changing colours so fast! Oldest Known Lizard 'Megachirella' From The Dinosaur Era Found in Italian Alps.

The video has got appreciation on Twitter as people marvel at its beauty. "Damn! That's most of the colour spectrum!" wrote one user. Other just called it "awestruck". It sure is an amazing transformation in a quick span.

Amazing, isn't it? It looks like the chameleon almost knew it was being captured, so it was time to show off its skills. That's a rare capture whoever must have got it.

(The above story first appeared on LatestLY on Sep 12, 2020 07:57 PM IST. For more news and updates on politics, world, sports, entertainment and lifestyle, log on to our website latestly.com).