Cyclone Tauktae Impact In Gujarat, Maharashtra And Other States: What We Know So Far About States Impacted By the Storm; Where is it Headed Next?

Cyclone Tukatae intensified on Sunday and was classified as "Extremely Severe Cyclonic Storm," by the India Meteorological Department (IMD). The first cyclone of 2021, Tukatae, is presently moving through Mumbai and will likely hit Gujarat by Monday evening. 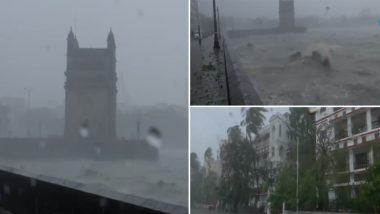 Cyclone Tauktae intensified on Sunday and was classified as "Extremely Severe Cyclonic Storm," by the India Meteorological Department (IMD). The first cyclone of 2021, Tukatae, is presently moving through Mumbai and will likely hit Gujarat by Monday evening. As heavy rains uproot trees and disrupt life around the nation, the cyclone that barreled down across the western coast, killing 8 in Karnataka's Malnad and coastal districts, is expected to hit many more states in the nation.

How many states have been Impacted by the cyclone so far?

India is already grappling with the second wave of Covid-19, and the country had to bear a heavy gust of wind and torrential rainfall as it lashed through the coastal belt of Kerala, Karnataka and Goa on Sunday. The IMD warned that the storm formed over the Lakshadweep in the Arabian Sea has intensified into an extremely severe cyclonic storm Tauktae and is moving towards the Gujarat coast. Many people were evacuated and relocated into relief camps along the coastal belt.

As of Monday morning, the storm was 160 km west-southwest of Mumbai and 250 km south-southeast of Diu, the IMD reported.

On Monday, heavy winds and rainfall swept through the streets of Mumbai, prompting authorities to urge the citizens to stay inside and closed the local train services and flight operations in the city. All operations at the city’s Chhatrapati Shivaji Maharaj International Airport have been shut till 6 pm. The Bandra-Worli sea link has been closed as the storm intensified in Mumbai. Fishermen have been asked not to venture out into the sea. Many states in the country including Karnataka, Kerala, Tamil Nadu, Rajasthan, and Maharashtra were put on alert.

Where is it headed?

Cyclone Tauktae is expected to pass close to the Mumbai coast then reach the Gujarat coast by Monday evening.

The States Expected to be hit by the Cyclone Tukatae

The IMP has put Gujarat on Red alert as the cyclone will pass through Gujarat by Monday evening and will cross the Gujarat coast between Porbandar and Mahuva in the Bhavnagar district. The cyclone is expected to make landfall between 8 pm and 11 pm on Monday after passing through the Gujarat coast. The IMD warned that the landfall will wreak havoc in the region with "high-speed winds, severe storm surge and torrential downpour."

The Cyclone Tauktae was named by Myanmar, translates to gecko - a highly vocal lizard, in the Burmese language. The Cyclone has put everyone in the nation on high alert and the authorities have requested citizens to stay inside and stay safe as substantial rainfall is expected in most states in the country including Gujarat, Rajasthan, Delhi, Haryana and Uttarakhand until Thursday.

(The above story first appeared on LatestLY on May 17, 2021 04:45 PM IST. For more news and updates on politics, world, sports, entertainment and lifestyle, log on to our website latestly.com).