A phenomenon of part of water turning pink in the wetland has been observed. A small part of the wetland itself has turned pink, a probable effect of a rare bloom of algae. The deep pink water is located in the south-eastern end of the Talawe wetland. 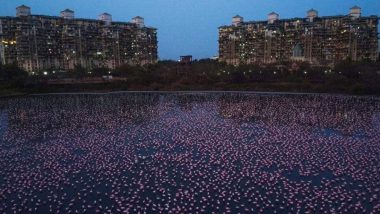 After a beautiful sight of over a thousand flamingos greeted Navi Mumbai last month, a phenomenon of part of water turning pink in the wetland has been observed. A small part of the wetland itself has turned pink, a probable effect of a rare bloom of algae. The deep pink water is located in the south-eastern end of the Talawe wetland. Hindustan Times photojournalist Pratik Chorge happened to capture it in his lens. This pink water wasn't there until a week ago. The cause of this small region turning pink is yet to ascertain. Flamingos Flock to Mumbai During Lockdown, Watch Videos of Thousands of Beautiful Birds Turning the City Pink!

As per the report in HT, it is a rare and first-of-its-kind occurrence which will be examined by the Bombay Natural History Society (BNHS). Local resident from the NRI Complex around told the report that she had spotted a similar spot but covering a larger area back in the year 2016. But at that time she thought it was an effect of some chemicals released into the creek. As of now, researchers are still unsure of what caused just a portion of the water to turn deep pink. But BNHS director believes it is cause of an algal bloom. "Around the world, such a phenomena has been observed regularly with red algae but it has to be investigated how it has appeared along the Mumbai creek," said Deepak Apte, director of BNHS. Tamil Nadu: Sea Turns Dark Green Colour Due to Presence of Algae.

Navi Mumbai sees the arrival of flamingos every year and this year the turnout was much greater than previous years. The pictures of these pink birds flocking over the wetlands went viral on social media. These flamingos are known to feed on these algae and aquatic plants which give them the pink colour. Talking about the water components Rahul Khot, the assistant director (in-charge of the flamingo monitoring program) told the report, "If this is a natural phenomenon, vigorous growth of algae or bacteria having this beta-Carotene gives this type of characteristic colouration to the water. It is also related to increased evaporation, salinity, and the current hot and humid weather conditions." He added that do not know how this impacts the migratory birds now in the region.

While the occurrence seems so rare to Navi Mumbai, other places like Odisha's Chilika Lake and Porbandar have seen it before. Sunjoy Monga a naturalist said they had witnessed similar pinkish maroon water in 2007 in Porbandar, which is a flamingo habitat spot. A microbiologist has explained in the report that it is because of a group of bacteria called halobacteria that grows in an extremely high saline environment. This glow gives it pink or reddish appearance.

(The above story first appeared on LatestLY on May 17, 2020 01:21 PM IST. For more news and updates on politics, world, sports, entertainment and lifestyle, log on to our website latestly.com).