Dotted Lines Create Optical Effect on This Black And White Photo Making it Look Like a Colourful One, Pic Goes Viral 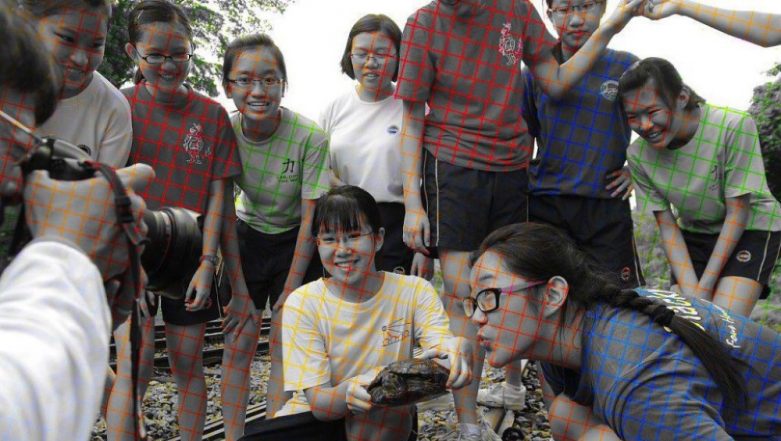 Optical illusions can be really mesmerising at times and can really make you think of the reality. Multiple times in the past, photos and videos that create an illusion in minds have gone viral on social media. And the recent one to be shared widely is the photo of a group of children posing for a picture. While the photo is black and white, colourful dotted lines printed all over it makes it look like a colourful picture. It is difficult to imagine that the kids are not wearing colourful T-shirts but plain coloured ones. Cat or Crow? Yet Another Photo Illusion Goes Viral on The Internet. And as the photo went viral, different reactions started pouring in. One of the comments read, "For me, the green and blue lines work the best and seamlessly blend into the background. Red looks like a grid on a grey background."

Some of them also went into the details of the picture and explained the science behind it. One of the comments read, Yes, and I think it's because the contrast between the red and dark colored shirt is greater than that of any other color combination in the picture. I know the human eye can see more shades of green than any other color, but I'd imagine we see red more quickly because it implies danger (same color as blood)."

Here's another explanation to the effect by a Reddit user: " As an artist, it's because Red is a warm color. Colors like Blue are cold colors, and tend to recede. There's some scientific reason about wavelengths and how our eyes adjust, but I don't really know the ins and outs so i'll leave it to someone else to better explain. This is why things like Stop Signs are red. And Yield Signs are Yellow. Both warm colors, easier to catch the eye.

The photo continues to go viral and has received innumerable reactions. People continue to comment on it explaining what they think caused the effect. Various such photos creating optical effect has always amused social media users in the past.