Dr Aisha Who Passed Away of COVID-19 Is Fake Story? Netizens Question Whether Viral Pics Are Real or Fake; Here's The Truth

Turns out people mourning for the loss of Dr Aisha due to COVID-19 may not be Dr Aisha at all! Dr Aisha is trending on Twitter when a picture of a woman smiling and the text along with asking for prayers for her recovery. But it has come up that it is most likely a fake news. 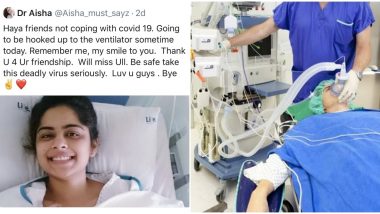 The pandemic of COVID-19 has gripped the nation and several people have unfortunately lost their lives. People on social media are always there to support and sympathise with one's losses. But turns out people mourning for the loss of Dr Aisha due to COVID-19 may not be Dr Aisha at all! Dr Aisha is trending on Twitter when a picture of a woman smiling and the text along with asking for prayers for her recovery. The text mentioned that she was on a ventilator and unable to cope up with COVID-19. While that tweet went viral another picture showing supposed 'Dr Aisha' getting treatment in the hospital while on a ventilator. Soon news of her demise was up and Twitterati mourned the loss. Turns out, it may not have been Dr Aisha after all and just a catfish account. While the first picture of Dr Aisha has not been sourced, the second one which claimed her being on a ventilator is from a "Dental Anaesthesia". Now whether Dr Aisha is a fake account or has been there a real loss is something that netizens are trying to dissect.

To give you a timeline, a tweet from an account (now disabled) by the name Dr Aisha (@Aisha_must_sayz) went viral two days ago. It said that Aisha was not able to cope up with COVID-19 and going to be hooked up on the ventilator. It had her smiling face and asked people to be safe from the virus. Aarogya Setu Wristbands to Track Coronavirus Patients? PIB Fact Check Debunks Fake News.

Another tweet from the same account, was supposedly made by her sister. It showed Dr Aisha her on a ventilator and the text said, "Keep Aisha in your prayer. The more her friends and Family pray for her, she may recover from this virus. Thank You." But the photo was on Dental Anesthesia which some users pointed out on Twitter. A reverse image search on this photo takes one to a picture of Dental Anesthesia Side Effects on Google. Soon the news of her death came on social media and people mourned the loss at an early age. Few journalists also tweeted condolence messages.

Condolence Messages For Dr Aisha After Her 'Death':

Dr.Aisha Embraced Shahadat Fighting Covid19.She recently qualified as doctor &celebrated her birthday on July17 & the farewell to this world on Eid yesterday with this glorious smile.Her family members were handed a sealed coffin due to the COVID virus.A life gone too soon.

Soon after the fake tweets and pictures were caught, people started tweeting that it was a fake mostly a catfish account. Journalists who had earlier tweeted condolence messages also deleted their tweets and confirmed that the story was most likely a fake one.

Here are Some Tweets:

Have deleted a previous tweet about a Dr Aisha. Turns out the account was fake ! You have to be really sick to pretend to have COVID

Reality is Dr. Aisha story is fake and this is an catfish account.

So is Dr Aisha Fake or Real?

Soon after people put up that the tweets and pictures seemed fake, the account was deleted from Twitter, which only gives a confirmation that the entire story could have been false. However, it is yet not clear as to who is the lady in question whose pictures are going viral. There is no confirmed source to say whether she is indeed Dr Aisha or maybe not. Also, the account which was from South Africa mentioned of her MBBS degree. However, in South Africa Bachelor of Medicine and Surgery (MB.ChB) is the degree.

(The above story first appeared on LatestLY on Aug 02, 2020 06:41 PM IST. For more news and updates on politics, world, sports, entertainment and lifestyle, log on to our website latestly.com).