A few days before the Silambarasan and Nidhhi Agerwal starter could make it to the screens, the thriller film has become the latest victim of piracy. Yes, Eeswaran is the recent release to be leaked on torrent sites and Telegram in HD prints. 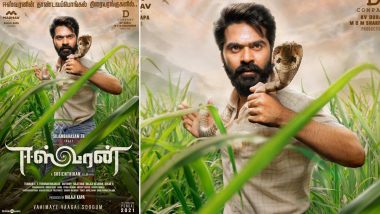 Silambarasan and Nidhhi Agerwal's Eeswaran has finally made it to the theatres today. The cinemas which have been shut down for the longest time now are seeing a lot of audience coming in to watch their favourite stars on the big screen. But a few days before the Silambarasan and Nidhhi Agerwal starter could make it to the screens, the thriller film has become the latest victim of piracy. Yes, Eeswaran is the recent release to be leaked on torrent sites and Telegram in HD prints. The film was leaked two days before its release and had everyone wondering how will it affect the film's business. Search engine platforms are currently flooded with keywords like Eeswaran Movie Full HD Available, Eeswaran movie download on Filmyzilla, Eeswaran TamilRockers download and more and are reportedly available in 1080p HD, 480p, 720p. You can also watch Eeswaran online on Fmovies, Yesmovies, 123Movies, Gomovies and More. Eeswaran First Look and Motion Poster Out Now: Silambarasan TR’s Next Film With Suseenthiran All Set For A Pongal Release.

Said to be a village drama, the film is said to be loaded with fun, romance and action. Bharathiraja, Bala Sarvanan and others are seen in supporting roles in the film. Directed by Suseenthiran, the movie is produced by Madhav Media and music has been provided by Thaman SS. Thirunavukkarasu has donned the hat of the cinematography of the film. Lead actor Silambaran lost oodles of weight to get into shape for his role in this drama based on life in a village.

Coming to piracy and how the authorities are taking care of it, back in 2019 the Indian Government introduced an anti-camcording provision in the Cinematography Act in the previous Union Budget. This was done to fight the piracy problem because of which the film industry loses up to Rs 209 crore every year. But it seems to have no impact at all. Let's see how the movie's business will be affected after its pirated version being available for the audience to see anytime.

(The above story first appeared on LatestLY on Jan 14, 2021 02:10 PM IST. For more news and updates on politics, world, sports, entertainment and lifestyle, log on to our website latestly.com).