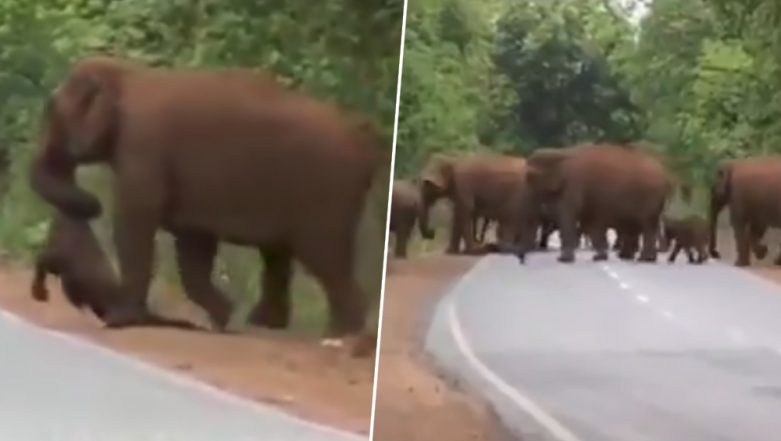 Video of a herd of elephants carrying the "funeral procession" of a dead baby in India has gone viral on social media. The video shows elephants crossing a road in a forest with one of them dragging a dead baby by its trunk. The group seems to be weeping and mourning the death of the baby. The clip was shared on Twitter by Parveen Kaswan, a foreign ranger in the Indian Foreign Service. The video is being widely shared on social media making people teary eye. The parade in itself looks sorrowful, enduring the pain of a loving one. Baby Elephant 'Dumbo' Dies at Thailand Zoo After Breaking Hind Legs While Forcefully Performing for Tourists (Watch Video)

In the video, the adult elephant which is carrying the baby first emerges out of the woods. The animal then puts the body on the road seemingly waiting for the rest of the elephants to join. A group of people can be seen standing at a safe distance watching the 'funeral procession' of the elephants. Parveen Kaswan posted the video on Twitter with the caption, "This will move you !! Funeral procession of the weeping elephants carrying the dead body of the child elephant. The family just don’t want to leave the baby." The video has gone viral collecting more than 1.6 lakh views and over 13,000 likes. Elephant Beaten Mercilessly With Sticks in Kerala, Shocking Video Goes Viral.

This will move you !! Funeral procession of the weeping elephants carrying dead body of the child elephant. The family just don’t want to leave the baby. pic.twitter.com/KO4s4wCpl0