Major social media platforms such as Facebook and Twitter may face ban in India if they do not comply with the Centre's new intermediary guidelines. This news has upset many netizens. However, cybernauts were quick to share memes and jokes around the ban along with sadness. 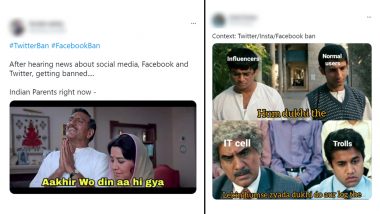 Major social media platforms such as Facebook and Twitter may face ban in India if they do not comply with the government's new intermediary guidelines. The deadline to accept the guidelines will end on May 25 and the new rules will come into force from May 26. However, none of the platforms including WhatsApp, Facebook, Twitter has complied with the regulations yet, except Indian social media company Koo. Facebook & Twitter Likely To Face a Ban in India if Failed To Comply With New Intermediary Guidelines: Report.

This news has upset many netizens. However, cybernauts were quick to share memes and jokes around the ban along with sadness. If you are upset too, we have created a compilation of memes and jokes on the current situation. Twitter, Facebook May Not Be Able to Operate in India From May 26 As They Are Yet to Comply With New IT Rules.

We aim to comply with all the provisions of New IT rule 2021- Facebook 😁 #FacebookBan #TwitterBan pic.twitter.com/UeEQzAnaTe

If government bans Twitter and Facebook, least they can do is add some chat feature in the CoWin app.

Following the reports of the Twitter ban, UberFacts (@UberFacts), an online webs service/application that provides people with random facts, was quick to thank its Indian users for their love and support.

"To our Indian followers: Following reports that Twitter may face a ban in the country as early as tomorrow, we'd like to take this opportunity to say "Thank You". The chance to connect over the last ten years has been nothing short of an honor, and we hope this isn't the end," UberFacts tweeted.

If the social media platforms do not comply with new intermediary guidelines, they will lose their status and protection as intermediaries. Meanwhile, the US-based firms had asked for six months time as they are waiting for a reply from the US headquarters.

(The above story first appeared on LatestLY on May 25, 2021 10:17 PM IST. For more news and updates on politics, world, sports, entertainment and lifestyle, log on to our website latestly.com).