A Viral Video Claiming Ajay Devgn Being Beaten Up In Delhi Is Fake; The Actor's Spokesperson Reveals He Hasn't Visited The City For A Year

A video on the internet is going viral where it is claimed that the man being brutally beaten up in it is Ajay Devgn. Now we know the truth. Ajay Devgn's spokesperson has refuted it all saying that the actor has not been to New Delhi, where the incident took place, for a year now. So all claims of it being Ajay Devgn in just rubbish. 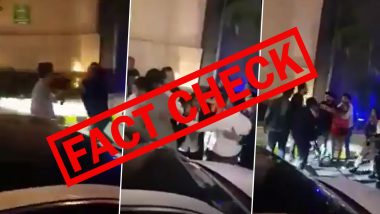 A video that claims Ajay Devgn is being beaten up in Delhi is doing the rounds of the internet. Now we know that it is completely false. News18 reports that Ajay Devgn's spokesperson has completely rubbished the video. The spokesperson has called it false informing that the actor hasn't been to New Delhi for a year now. The spokesperson also claimed that post Tanhaji's promotions, the actor have not been in the capital city. Presently, he is busy shooting for Maidaan, May Day and Gangubai Kathiawadi in Mumbai. So any reports of Devgn being outside the Delhi airport, where the incident took place, is clearly false. India News | Man Held for Stopping Ajay Devgn’s Car over His Tweet on Farmers’ Protest

The video shows two sets of people getting into a brawl. A Twitter user shared the video with a caption that suggests he too is confused if it really is Ajay Devgn. The truth is finally out. Check out the Tweet that's going viral. Ajay Devgn Starts Shooting For Alia Bhatt’s Gangubai Kathiawadi Today; Reunites With Sanjay Leela Bhansali After Hum Dil De Chuke Sanam (View Pic)

Not really sure if this is #ajaydevgan or not but #Kisanektamorcha agitation seems to be spreading up. Social media floating with this video that drunk @ajaydevgn got beaten up?? #RakeshTikait pic.twitter.com/Fv8j0kG5fv

According to the News18 report, clashes happened between two sets of people on the subject of parking tickets at Aerocity, outside Indira Gandhi international airport. The situation got worse and as you can see in the video, one of the men got beaten up severely. Many felt this same white-shirt-clad guy is Ajay Devgn. Now we know it is not true, so please don't trust this rumour.

The claim is fake because it isn\'t Ajay Devgn in the video. The actor\'s manager confirmed the same saying he hasn\'t been to New Delhi for a year now.

(The above story first appeared on LatestLY on Mar 29, 2021 02:23 PM IST. For more news and updates on politics, world, sports, entertainment and lifestyle, log on to our website latestly.com).