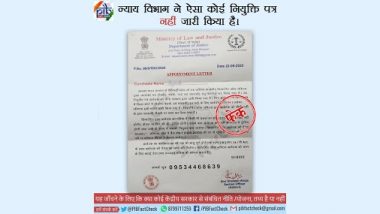 New Delhi, August 31: A viral post is doing rounds on social media platforms claiming that the Department of Justice has selected applicants like peons, clerks and guards by directly recruitment for the government jobs. The misleading claim states that: 'In an appointment letter, it is being claimed that the Department of Justice has selected several peons, guards and clerks for government job by direct recruitment.

Dismissing the fake claims, a fact check by Press Information Bureau (PIB) reveals hat the claim made in fake appointment letter is not true. It added saying that the  Justice Department has not made any such announcement for any government job. "This appointment letter is fake, the Justice Department has not given any such order", the PIB fact check said. Fact Check: Viral Advertisement Claiming Centre is Giving Tractors to Farmers in Half Price Under PM Kisan Tractor Scheme is Fake.

In an appointment letter, the Department of Justice has selected applicants like peons, clerks and guards for government job by direct recruitment.

A fact check by PIB stated that the appointment letter is fake, as the Justice Department has not given any such order.

(The above story first appeared on LatestLY on Aug 31, 2020 09:29 AM IST. For more news and updates on politics, world, sports, entertainment and lifestyle, log on to our website latestly.com).