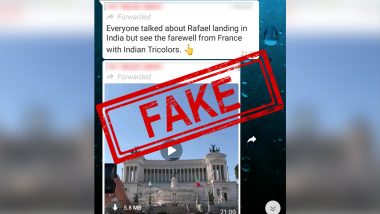 New Delhi, August 3: Five Rafale fighter jets reached India on July 29. Recently, a video is going viral on social media claiming that France bid farewell to these aircraft in a grand ceremony. In the video, it could be seen that fighter jets emerged from behind a huge building. These jets formed a tricolour in the sky with smoke trails of green, white and red colours. Rafale Fighter Jets Arrive in India: Aircraft to be Part of Ambala-Based 'Golden Arrows'; Know About 17 Squadron of IAF.

According to India Today, the video has no connection with Rafale jets farewell ceremony. It is an old video of Italy’s Republic Day celebrations in Rome. The claim in the clip is false. The video is widely circulated on social media, including WhatsApp with a claim, “Everyone talked about Rafale landing in India but see the farewell from France with Indian Tricolors.” 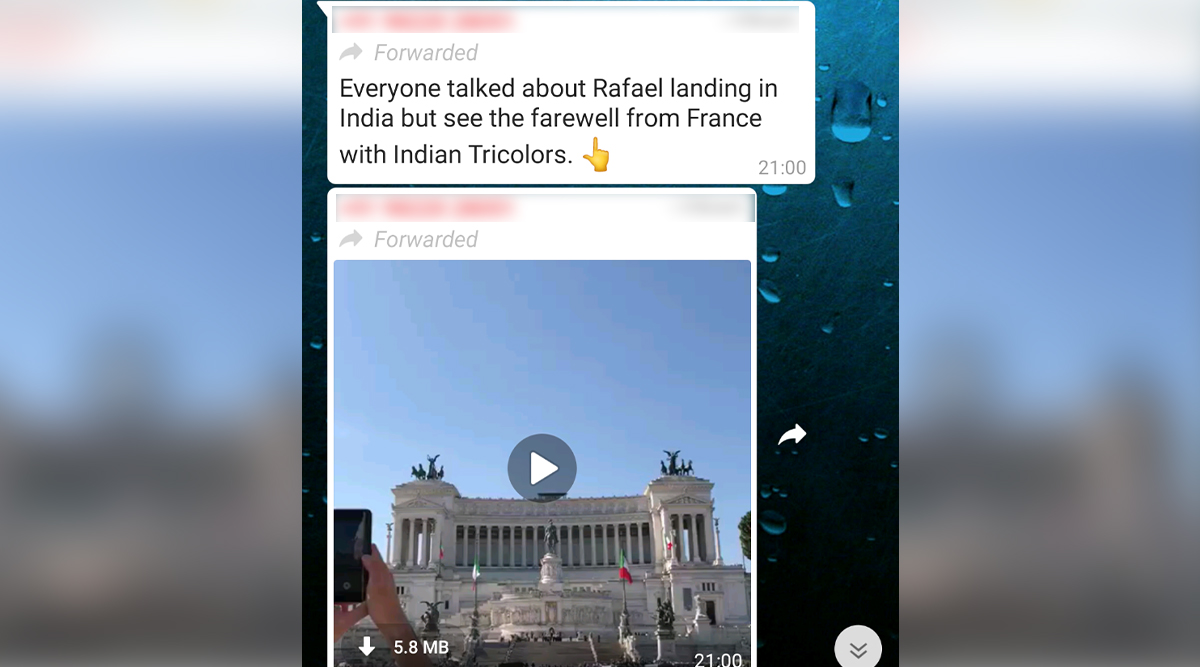 Italy celebrates its Republic Day on June 2. The Italian Air Force performs several stunts on this day. The magnificent building seen in the viral video is Victor Emmanuel II National Monument. It is from here the national day parade starts. Notably, Indian and Italian national flags have green and white colours in common. In the Indian Tricolour, the third colour is orange, whereas the third colour in the Italian flag is red. Last year also, this video went viral with a claim that the Indian Independence Day was celebrated at in London’s Trafalgar Square. Fact Check: Viral Post Asking People to Download App From Google Play Store For Checking Oxygen Level by Clicking on Link Provided in The Message is Fraud.

The first batch of five Rafale jets landed at Ambala Airbase of the Indian Air Force (IAF) on Wednesday. The Rafale fleet comprised three single-seater and two twin-seater aircraft. These fighter jets will be inducted into the “Golden Arrows” or 17 Squadron of the IAF.

The viral video has no connection with Rafale jets. It is an old clip of Independence Day celebrations of Italy.

(The above story first appeared on LatestLY on Aug 03, 2020 11:11 PM IST. For more news and updates on politics, world, sports, entertainment and lifestyle, log on to our website latestly.com).