Fish Fillet in Oven Comes Back to Life? Viral Video of ‘Zombie’ Fish Will Scare the Hell Out of You

The YouTube video begins with opening the oven while the fillet of the fish was seen twitching rapidly. While the video appeared to be horrifying there is a science behind this incident. 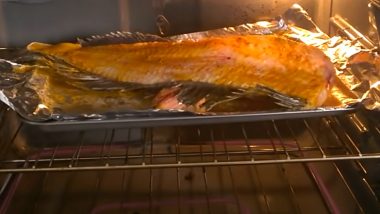 A bizarre and horrifying incident took place when a fish fillet appeared to be jumping up and down while it was cooking in an oven! The viral video begins with opening the oven where this fish fillet is seen twitching rapidly. While the video appeared to be horrifying there is a science behind this incident. Although the fish’s brain and heart do not function, the cells in the body respond to stimuli. So, this could be the possible reason behind the mysterious 'zombie' fish. Heard of 'Zombie Snail' - Viral Video is Terrifying People Out Of Their Wits!

The video has been shared by several channels on YouTube as well as on Reddit. And people have gone quite creative with their reactions in the comments section. One user commented, writing, "Gordon Ramsay: and how fresh is this fish? Waiter: its still jumping [sic]". Another one commented, "You ever heard about the phrase "when you're alive but dead inside" Well this fish is literally the opposite of that. [sic]"

Have a look at how this fish fillet move while cooking in the oven!

In a similar incident, a viral video of a piece of raw chicken seemed to come back to life on a dining table. The chicken had been skinned and cut into pieces while the real reason for this horrifying incident was not clear.

(The above story first appeared on LatestLY on Aug 19, 2021 02:16 PM IST. For more news and updates on politics, world, sports, entertainment and lifestyle, log on to our website latestly.com).