Often pictures and videos of these creatures go viral making people wonder if they really exist or not. The recent one to go viral was a fish in Malaysia that has human-like features. It has actual teeth and lips like humans. As the video goes viral, we bring to you pictures of creatures with human-like faces that was shared widely in the past. 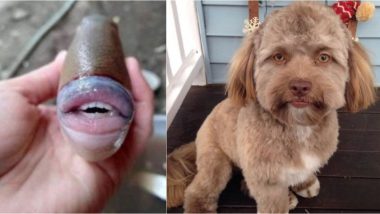 Internet is an amalgamation of all things you may not find elsewhere. Among one of the things that are going viral on social media platforms are animals, reptiles and other beings that have human faces. Often pictures and videos of these creatures go viral making people wonder if they really exist or not. While some people believe it is real and share facts to prove their claim, others believe they are just photoshopped pictures. The recent one to go viral was a fish in Malaysia that has human-like features. It has actual teeth and lips like humans and is known as Triggerfish. It is normally found in South East Asian water bodies. As the video goes viral, we bring to you videos and pictures of creatures with human-like faces that was shared widely in the past.

Multiple times in the past dogs, fish and other animals have surfaced on the internet for having faces that look like a human being. They were widely shared on social media with people coming up with various theories about their features. Here is a compilation of videos and pictures of such animals that shook the internet users. Are These The Weirdest Sea Creatures Ever Seen? Russian Photographer Shares Underwater Pictures from Atlantic and They Are Creepy!

Video of a fish with a human face was spotted swimming in a lake in Kumming, China. The marine animal had markings on its head and a face that resembled a man. The video was widely shared on social media.

Yogi, a cute little dog of the Shih-Tzu breed had gone viral in 2018. Its facial features made the dog be compared with actors such as Jake Gyllenhaal and Paul Rudd.

Videos and pictures of goat born with human face had gone viral on social media platforms. The goat was born in Nimodia in Rajasthan, northwest India and the locals in the region considered it as a form of God.

A mutated calf with human face had stunned farmers in the remote village of Villa Ana in north Argentina. The calf had a small nose and a mouth like that of a human. The video that went viral showed the calf lying on the grass looking into the camera.

These are some of the examples of animals and creatures that shook the social media. In a similar case in 2016, Qiu Xiaohua, an elementary school teacher had found a human-like fish in Wugang City, in Central China’s Hunan Province. He found it while fishing following which pictures of the creature went viral.

(The above story first appeared on LatestLY on Jul 11, 2020 08:16 PM IST. For more news and updates on politics, world, sports, entertainment and lifestyle, log on to our website latestly.com).