A 38-year-old Seattle-based Uber driver offers his riders a 'menu' from which they can select a preferred ride. 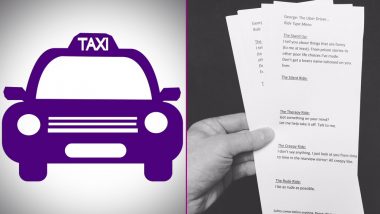 Those who use app-based taxi service are sure to have met different types of cab drives. From some being extremely nagging, surprisingly polite, to being intrusive, we are generally prepared to meet a driver with a different trait with every ride. However, a Uber rider was surprised when his driver asked him the kind of ride he would prefer. A 38-year-old Seattle-based Uber driver named George offered his rider a 'menu' from which he could select his preferred ride.

The options included 'The Stand-Up', 'The Silent Ride', 'The Therapy Ride', 'The Creepy Ride' and 'The Rude Ride'. All the ride options were accompanied with details explaining how the future ride would be like. His creative idea went viral after his passenger Luis Arguijo tweeted pictures of the menu cards saying, "Last night my Uber gave me a menu on what kind of ride I wanted." Uber Driver Waits With 2 Women for 1.5 Hours at Midnight After Dropping Them As Gate to Their House Was Closed.

last night my uber gave me a menu on what kind of ride i wanted , pic.twitter.com/SMBBV4kVpu

The tweet went viral receiving over a lakh retweets prompting George who did not have a Twitter account to start one. Most netizens said that his idea deserves a full five star and praised his efforts. George is a part-time emergency medical technician and also a Uber driver. Talking about the inspiration behind his 'ride type menu', George told Forbes, "I want to give good service and if someone's not up for talking, I just want to give them the option."

Selfie while driving the other night. Parked of course. #safetyfirst #drivesafe pic.twitter.com/48TXpDk3gj

I’m so happy that my menu is making so many people laugh. It is humbling and exciting to see this all over the Internet. Special thanks to @LuisLovesGoats for posting, @mccurly911 for letting me know this went viral, and @Uber for the awesome employment. 🔝🙏🏻☝️

The report quoted Luis as saying, "He's the best Uber my friends and I have ever had. We chose the 'Therapy Ride' and from the start of our ride, he was a really good listener and understanding. We could tell he was a genuine guy. I'm glad he's received all this love, he deserves it." Talking about the tweet gaining a lot of attention, George said, "I am in shock. I had no idea went viral until about five hours ago when a friend contacted me to tell me about it. I think people like it because it helps the rider have a voice as to what kind of experience they would like."

(The above story first appeared on LatestLY on Feb 28, 2019 06:07 PM IST. For more news and updates on politics, world, sports, entertainment and lifestyle, log on to our website latestly.com).