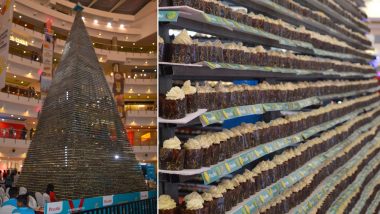 A new world record of the tallest tower of cupcakes was created in Chennai recently. The feat was achieved by Preethi Kitchen Appliances and Food Consulate Chennai by making a tower of about 18,818 cupcakes that measured 41 feet and 8 inches. All these cupcakes were baked at their site and the effort was done to celebrate Preethi Kitchen Appliances’ 40th anniversary. While they wanted the record to coincide with the New Year's Celebrations they have managed to make the record successfully a little later. Guinness World Record of Longest Line of Sanitary Napkins Created in Bengaluru to Promote Menstrual Hygiene, Watch Video.

The tallest tower was placed at the Forum Vijaya Mall, one of the largest malls in Chennai, amidst a lot of crowds gathered around to witness the attempt of building it. The cake mixture was prepared on the site, baked, iced and then decorated. These cupcakes were then placed carefully on the huge pyramid structure here. To make the cake batter and mixture, they used all material utensils from Preethi Kitchen Appliances. The entire making of the tower took about 30 hours to complete with a team that was continuously working hard to achieve the feat. Gujarat Real-Life Rapunzel Nilanshi Sets Guinness World Record for Longest Hair on Teenager Category (Watch Video).

Watch Video of Tallest Tower of Cupcakes Created in Chennai

Each of the cupcakes weighed about 70 g and the entire weight of the cupcakes alone was to a hefty 1.3 tonnes. It is a mandate that all the food-related world records cannot have the food going to waste. So Preethi Kitchen Appliances distributed all the cupcakes to NGO’s. 10,000 cupcakes were given to Kakkum Karangal, an organisation in Chennai that cares for the homeless, from the elderly to children.

The previous world record for the tallest cupcake tower was made in South Africa in the year 2017. It was a staggering 10.7m tall tower showcasing with 6‚370 cupcakes for a charitable cause.

(The above story first appeared on LatestLY on Feb 04, 2019 06:08 PM IST. For more news and updates on politics, world, sports, entertainment and lifestyle, log on to our website latestly.com).