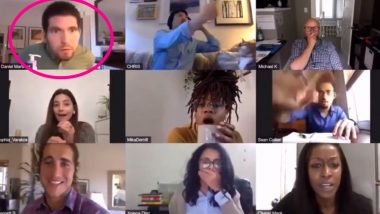 In the past few months, as people around the world work from home, video calls, video conference meetings have become the common ground of working. And we have seen enough of zoom meeting fails too, boss turning into a potato, to others experimenting with the virtual background. But it is Pornhub's latest ad commercial about "Wank From Home" that almost makes you believe it is a real situation of a zoom call fail! A video of a guy accidentally masturbating on zoom call in front of his colleagues has been shared online. No points to guess that it has gone crazy viral, raking over a million views. Some of them have given the funniest reactions. Video of Naked Man on Zoom Call with Brazilian President Goes Viral after He Forgets to Switch off the Camera During the Virtual Meeting with Jair Bolsonaro (Watch Video).

Twitter user nasquiat (@nazquiat) has shared a short clip which looks like an office zoom meeting. People are heard discussing consumer spending, but a guy named Daniel Martinez is far from being interested in consumers but has his own demands. He goes on to shut off the video but it doesn't. Daniel then gets up, brings in a lubricant bottle and box of tissues. While one of his colleagues seem to get an idea, Daniel gets on with his "own business". Others on the call are seen visibly shocked and while someone does try to call him, he seems to be too ignorant. The caption to this video on Twitter reads, "Daniel can't hear you guys again, he's in heaven," and that's just the start of funny reactions coming in. But that video ends abruptly. Woman Accidentally Uses The Toilet While on Work Video Call, Netizens Shower Support to #PoorJennifer Slamming Her Co-workers As Video Goes Viral.

The video has got over 1.5 million views in barely two days. Check out the funny reactions on this video.

Let off Some Steam?

He's Having a Nice Time

Daniel just wants to have a nice time😂😂

Did You Notice His Expression?

Watch it For the Laughs

(The above story first appeared on LatestLY on May 31, 2020 12:54 PM IST. For more news and updates on politics, world, sports, entertainment and lifestyle, log on to our website latestly.com).