Levi Jed Murphy, Influencer Spends Rs 30 Lakhs on Plastic Surgery to Look Like Instagram Filter! His Pics Are So Unreal

Levi Jed Murphy, who runs an official Instagram account with his boyfriend, has pictures of his transformed look. According to reports, he ended up spending about 30,000 Euro, more than Rs 30 lakhs, to get the chiseled look. 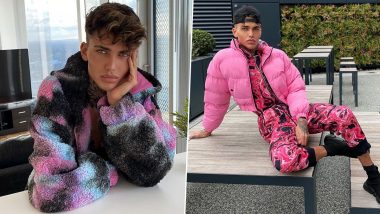 Social media has both its positive and negative influence on users. It has given many opportunities for people across the world to rule the platform with their unique talents and some filters to achieve unreal beauty standards. While that has always been up for debate, an influencer went ahead to achieve the look with plastic surgeries, modifying faces with augmented filter cat-eye, fuller lips and super nonporous refined skin texture. Levi Jed Murphy, who runs an official Instagram account with his boyfriend, has pictures of his transformed look. According to reports, he ended up spending about 30,000 Euro, more than Rs 30 lakhs, to get the chiseled look.

Plastic surgeries are quite common among people these days. Be it Barbie fanatics, or Angelina Jolie lookalike Sahar Tabar, social media has revealed how some spends an enormous amount to get newer versions of themselves. Similarly, Murphy decided to go on cosmetic surgery to alter his face and look similar to an Instagram filter. At the age of 19, he had done his first cosmetic procedure by getting his lip fillers. In addition to getting a chiseled jawline, botox brow lifts, several hyaluronic fillers for temple lifts, contouring his cheeks, straightening his teeth, face fat reduction and other procedures.

Even though he is pretty convinced and delighted with his new look, fans on social media seem unhappy. They troll him regularly, even comparing him to the mask from the movie The Purge. Woman Spends Over Rs 3 Million on Plastic Surgery After Being Called Ugly, Turns Into Raunchy Social Media Superstar.

However, the influencer is not bothered much by negativity. “Instagram put out a filter where it shows you what you would look like after having plastic surgery and I loved what I saw,” he was quoted saying in reports.

While size acceptance, body positivity, and fat activism are now part of the cultural lexicon, studies reveal how cosmetic surgeries are rising. Murphy is one out of millions who opt for surgery to meet their aesthetic goals.

(The above story first appeared on LatestLY on Mar 17, 2021 09:32 PM IST. For more news and updates on politics, world, sports, entertainment and lifestyle, log on to our website latestly.com).