A video of something mysterious roaming in the waters of Luoyang Lake in China has been shared online. The video has sparked speculations if it is Loch Ness of China. The video has gone viral on Chinese social media and sparked some fears among the locals here. 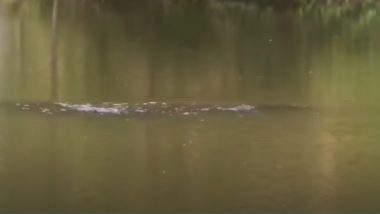 Do you believe in the legend about mystery creature Loch Ness in Scotland's lake? For years, there have numerous reports and theories about some huge sea creature living in the Loch Ness lake. Efforts have been made to scientifically find Nessie's (as it is nicknamed) existence as well as people trying to capture the animal on their cameras. Now a video of something similar roaming in the waters of Luoyang Lake in China has been shared online. The video has sparked speculations if it is Loch Ness of China. Loch Ness Monster Spotted Swimming Again? Webcam Footage Shows Nessie Amid Speculations About Recent Photo of Mythical Creature in Scotland (Watch Video).

The video has gone viral on Chinese social media and sparked some fears among the locals here. Villagers, as well as local media, wonders if this could be like similar to the legendary monster. The footage shows the creature swimming in the water at a steady speed. As per reports in Express UK, the creature was about 10-feet. The video of the mysterious sighting is going viral online.

What do you think? Could it be a Nessie tale in China too? Some sceptics have said it could possibly be a crocodile. This is not the first time a mystery of Loch Ness has come in from the country. People in China believed that they spotted Nessie at the Yangtze River near the massive Three Gorges Dam last year.

Meanwhile, just last month, a picture of a giant sea creature was going viral online as being the Loch Ness Monster. The photo saw a grey coloured huge fish reportedly taken in Scotland last September. It went viral with the caption, “Is this the Loch Ness Monster?” on Twitter. So the mystery around Nessie in Scotland still remains but now locals in China are wondering if they have a monstrous creature of their own now.

(The above story first appeared on LatestLY on Jul 15, 2020 08:36 PM IST. For more news and updates on politics, world, sports, entertainment and lifestyle, log on to our website latestly.com).