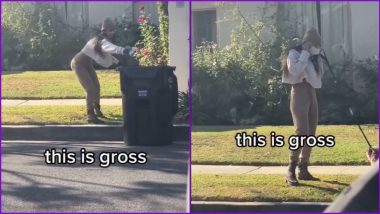 Check Mia's Response to The Video on Instagram Story:

She may have owned up to it but that does not make it any less disgusting! Check how people have reacted.

Her dog when he seen that mask go back on pic.twitter.com/xvgNqQm0fF

I don’t want to believe this... pic.twitter.com/ZK3RlF4mEc

People have posted similar pictures, GIFs and laughing reactions to her actions. Well, Mia probably thought no one would come to know of it, but now it is on the eyes of the internet and probably going to haunt for more days to come.

(The above story first appeared on LatestLY on Dec 18, 2020 01:41 PM IST. For more news and updates on politics, world, sports, entertainment and lifestyle, log on to our website latestly.com).