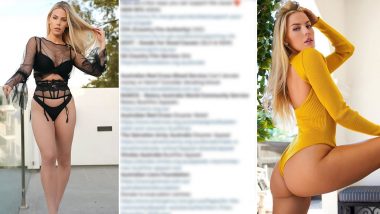 Models Jenna Lee and Kaylen Ward have joined forces to combat Australia bushfires and how. While American model Kaylen Ward also known as THE NAKED PHILANTHROPIST (@lilearthangelk) has become quite an internet sensation by raising more than half a million dollars for wildfire victims. She did so by trading nudes and x-rated images. Following Kaylen Ward's steps, another model, Jenna Lee is now participating in the noble cause by posting their X-rated images in exchange of hefty donations.  Jenna Lee, an XXX Instagram model who is who has over 30.2K Followers on Twitter has joined the bandwagon. She sells her naked NSFW pictures to anyone who is ready to donate to the Australia bushfire. She sells each of her nude pictures for  $10 as fundraisers for the unfortunate fire.

According to the latest update, she has raised $25,000 until now just by selling her nudes. She took her Twitter to post on Sunday, "Joining @lilearthangelk! I’m sending this nude to every person who donates at least $10 to anyone of these fundraisers for the wildfires in #Australia. You must DM me confirmation that you donated, nude sent via DM. Please RT #AustraliaOnFire #AustraliaFires" Kaylen Ward Trades Nude Photos for Australian Bushfire Charity: American Model Shares Her 'REAL' Instagram Account.

Joining @lilearthangelk! I’m sending this nude to every person who donates atleast $10 to any one of these fundraisers for the wildfires in #Australia. You must DM me confirmation that you donated, nude sent via DM.

According to Jenna Lee's website, she sells her nudes, videos and also lets her clients accompany her to the nude photoshoots of her own to get an exclusive peek into her model life. To unlock her exclusive XXX images & videos one can even get a subscription which is monthly ($9.99), 6-month ($29.99) and annual ($49.99). This comes after the Instagram model Kaylen Ward posted nude selfies and X-rated NSFW photos to raise donations for Australian bushfire victims. Although she has her account deactivated but she did raise a huge sum for those who are fighting the devastating blazes. The Texas model said that she traded nude selfies and X-rated NSFW photos and raised over $100,000 for the bushfire victims. However, Instagram has reportedly deactivated her account, stating that she violated their guidelines.

(The above story first appeared on LatestLY on Jan 07, 2020 11:22 AM IST. For more news and updates on politics, world, sports, entertainment and lifestyle, log on to our website latestly.com).