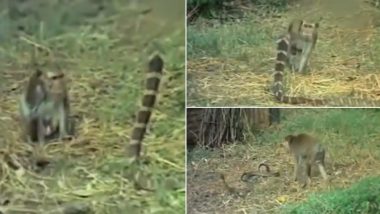 The wild often shocks us with its varying habits, all for its survival. While we sympathize with some, others appear gruesome. A video that is currently going viral on social media shows a rare fight between a monkey and King Cobra. The video shows the monkey fearlessly attacking the snake from all sides and emerges victorious in the end. It goes around the Cobra trying to bite it and in return, the snake is not ready to let go. The fight goes for a long time with even the snake trying to bite the monkey. Such videos of animals are quite rare, but there is nothing that the internet does not know about. Bathing Cobra to Rat Chasing Away a Serpent, Interesting Snake Videos That Went Viral This Week.

Indian Forest Officer (IFS) Susanta Nanda shared the video on Twitter with the caption, "Monkey fighting a King Cobra and coming out triumphant. One of its kind. (Free wild from chains and cages. Forest is their rightful place)." The video was shared widely on social media platforms with people sending posting varying comments. While some praised the monkey's bravery to pick up a fight with the King Cobra, others wondered what triggered the fight. One of the comments read, "What's in it for a wild monkey to fight a king cobra? What's his gain?" Monkey's Rescue Operation to Save Baby Stuck on Cable Wires Goes Viral, Netizens Laud Mother's Love (Watch Video)

One of its kind🙏

My goodness. It’s thrilling to see. Not sure how monkey handled that cobra.

He is a champ

Wonder what triggered the fight

Survival of the Fittest!

Great tricks of both fighter.

Survival is the fittest.

But what was the result?Who is winner or Whether both died ?

WOW what a fighter 👌😮

While the monkey is engaged in an intense fight, it quite smartly avoids getting close to the snake. The animal fights from a distance and even jumps once or twice when it feels the snake is coming too close. Netizens pointed out that the monkey quite smartly tackled its enemy.

(The above story first appeared on LatestLY on Jun 04, 2020 03:48 PM IST. For more news and updates on politics, world, sports, entertainment and lifestyle, log on to our website latestly.com).