Mumbai Couple's Fight on Street Gets Dramatic in the Middle of Road as Wife Climbs Husband's Car, Video Gets Viral 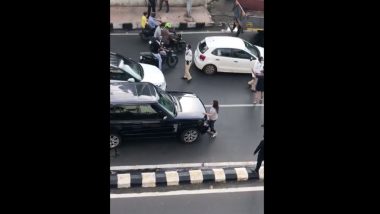 Mumbai, July 13: A video of a couple fighting with each other went viral on social media. According to reports, the video was shot on Saturday evening and showed a couple fighting in the middle of the city's posh Peddar Road. The woman was reportedly chasing a Range Rover for a long time, in which her husband was in with another woman. She stopped the vehicle by overtaking it and came in the front of the car.

From getting up on the car bonnet to yelling on the road, she created high voltage drama in front of everyone on the streets. The husband was forced to come out of the car. Two videos went viral and were widely shared on social media sites, and one of them also show the woman kicking her husband. Ludo Fight Takes a Hilarious Turn As Wife Accuses Husband of Being ‘Dishonest’ While Playing the Board Game, Both Land in Police Station.

The traffic police present on the spot took both the women and the men to the nearby village Devi police station. However, no complaint was filed from either side. The police had to issue challan of both the vehicles due to the ruckus caused on the road due, as a result of which, the vehicles couldn't move and there was an unnecessary commotion.

(The above story first appeared on LatestLY on Jul 13, 2020 12:42 PM IST. For more news and updates on politics, world, sports, entertainment and lifestyle, log on to our website latestly.com).