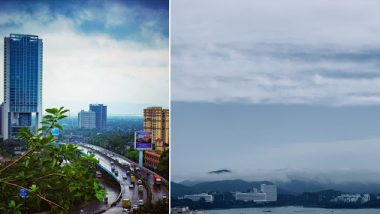 It seems like it is going to be a rainy weekend! Mumbaikars woke up to heavy rainfall, thunderstorm and strong winds this morning (Saturday). The unexpected change in weather made netizens sceptical if the rain is an aftereffect of Cyclone Nisarga which created havoc in some parts of Maharashtra, two days ago, sparing Mumbai to a large extent. As it started pouring heavily, pictures and videos from the rainfall also began to pour on social media, as Twitterati are surprised with the weather. While some are relieved for the change in weather, others are wondering if the showers are an aftereffect of the cyclone. Social media at the moment is flooded with pics and videos displaying heavy rainfall in the city of dreams. Mumbai Rains Funny Memes and Jokes Trends on Twitter: First Spell of Pre-Monsoon Reminds Netizens of Marine Drive During the Lockdown.

Maharashtra has been experiencing extreme temperatures recently because of the heatwave. The arrival of cyclone Nisagra brought some respite to the heat and also created havoc in parts of Maharashtra. Post that, parts of the state has been experiencing rainfall and a change in weather for the past few days. As heavy rain lashed the city of Mumbai in the early hours today, netizens took the opportunity to share the moment on Twitter. The pictures and videos remind Mumbaikars to be prepared as monsoon are surely arriving soon. The first spell of pre-monsoon is already, and the city will soon experience the rainy season.

Woken up with this sound and view⛈.....Has monsoon☔ arrived already or it is after effect of cyclone🌪#MumbaiRains pic.twitter.com/QiUKYJ4ElF

#MumbaiRains !! Monsoon season is here! I love rains !! Makes me happy and spreads positivity. People who hate rain, I will never understand you 🤷🏽‍♀️ how can u not love this weather? #positivity #rains #monsoon pic.twitter.com/PPSUxdSK6r

Monsoon or Aftereffect of Cyclone Nisarga!

The #MumbaiRains are here already ??? Or it’s still the after effects of the cyclone , woke up to this storm . pic.twitter.com/8lK7VXrTfw

A Slow-Mo Video of Mumbai Rains

Woke up to the sound of rain and its raining very very heavy in Mumbai. #MumbaiRains #Afterstormeffect What a sight to watch on weekend. pic.twitter.com/IWcL8dxLWk

After a long-long weekend it's time to kick start the life with full of passion.

Cyclone Nisarga slammed the coastal districts of the state with wind speeds up to 120 kmph on Wednesday, June 3, 2020. Maharashtra Chief Minister Uddhav Thackeray reportedly visited Raigad district to review the impact of the cyclone and also announced assistance of Rs 100 crore. Meanwhile, the state is also facing the coronavirus outbreak, which has infected more than 77,000 across Maharashtra.

(The above story first appeared on LatestLY on Jun 06, 2020 09:51 AM IST. For more news and updates on politics, world, sports, entertainment and lifestyle, log on to our website latestly.com).