Nanaia Mahuta’s Chin Tattoo ‘Tā Moko’ Gets Global Recognition! What Is a Moko Tattoo? Can You Get a Ta Moko? Know More About the Traditional Māori Tattoos

Nanaia Mahuta, who has a moko kauae—the traditional Maori tattoo on the chin displayed an immense sense of pride at the cabinet and also curiosity among other nationals across the world. All frequently asked questions about the traditional Māori tattoos ‘Tā Moko,’ will be answered in this article. 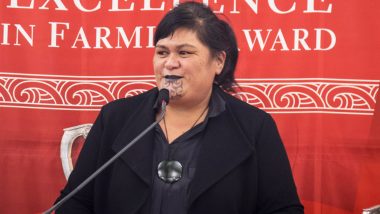 The Prime Minister of New Zealand, Jacinda Ardern announced the parliament’s newest ministers recently, and the appointment of a few members has come in as a great surprise. Jacinda Ardern unveiled what she called it an “incredibly diverse” cabinet, and it includes the country’s first openly gay deputy prime minister and a foreign minister with a Maori facial tattoo. Nanaia Mahuta, who has a moko kauae—the traditional Maori tattoo on the chin displayed an immense sense of pride at the cabinet and also curiosity among other nationals across the world. With still a rare sight in national politics, facial moko are increasingly common in contemporary New Zealand society, not many us may have known. So, what is a moko tattoo? What does the word Moko mean? What is the purpose of Moko? And many more, frequently asked questions about the traditional Māori tattoos ‘Tā Moko,’ will be answered in this article.

What is a Moko Tattoo?

Moko tattoos, called ‘Tā Moko,’ is the permanent marking or a tattoo on the face and it is traditionally practised by the Maori, the indigenous people of New Zealand.

What Does a Moko Mean?

Moko means tattoo in Maori culture. In Maori culture, the facial tattoo reflects the individual’s whakapapa (ancestry) and personal history. In traditional time, women usually wore moko on their lips and chins, or sometimes on the throat and men’s moko would cover their entire face.

Can Anyone Get a Ta Moko?

Maori tattoos carry a lot of spiritual and mythical meaning. The custom-made designs are inspired by traditional conventions and can carry their own special meanings. Kirituhi, Ta Moko, moko kauae are all the official names for a Māori-style tattoo, and anyone can make one, and it does not matter where they come from or their cultural upbringing. You can carry the tattoo, and in this way, Maori can share their customs with the masses.

What is the Purpose of Moko?

The moko contained information about a person’s lineage, tribe, occupation, rank and exploits. They are unique to each individual and told about their life and history.

What is the Difference Between Kirituhi and Ta Moko?

Kirituhi is a Maori style tattoo either made by a non-Maori tattooer, or made by the non-Maori wearer. It is no lesser an artform than moko; however, it is different. Ta moko is primarily for those of Maori blood and descent, while Kirituhi is for those of non-Maori heritage.

For those with traditional Maori tattoos, Mahuta has been breaking down barriers since a long time, and she will continue to do so in the political field as New Zealand's Foreign Minister.

(The above story first appeared on LatestLY on Nov 05, 2020 12:15 PM IST. For more news and updates on politics, world, sports, entertainment and lifestyle, log on to our website latestly.com).