The new tardigrade was found in a clump of moss that was sticking out of a concrete parking lot in Tsuruoka—a city in Japan. But there were two major differences that set the new species apart. 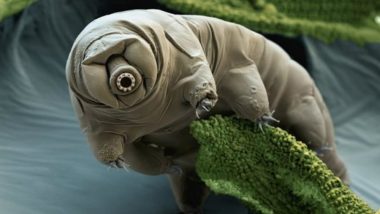 A new tardigrade species has been identified in Japan, according to a study led by Daniel Stec and his colleagues from the Jagiellonian University, Poland. The new tardigrade was found in a clump of moss that was sticking out of a concrete parking lot in Tsuruoka—a city in Japan. The researchers studied their physical characteristics and discovered unique features that make the species different from the rest of tardigrades. The research was published on February 28, 2018 in the open access journal PLOS One. The newly identified is known as Macrobiotus Shonaicus.

What is a tardigrade?

The tardigrades are the smallest known animal on the planet Earth and they are commonly known as moss piglets or water bears are water-dwelling, eight-legged segmented micro animals. They like to live in moss, decaying leaves and soil and were first discovered by German zoologist Johann August Ephraim Goeze in 1773. These water bears can be found all over the world with over 1,000 described species so far; but scientists think there could be many more.

According to reports, there are 167 known species in Japan alone. Macrobiotus Shonaicus, a completely new species of tardigrade. The addition of Macrobiotus Shonaicus now increases this number to 168. The name Shonaicus refers to the Shonai region, (a town in Japan) in which it was found. The scientists further informed that this new species belongs to the hufelandi group of tardigrades as their eggs have similar characteristics. The researchers studied their physical characteristics using phase contrast microscopes, where a transparent object is conveyed through changes in brightness and scanning electron microscopes. They also studied their DNA and identified four molecular genetic markers that differentiates them from any other known species of tardigrade. They further noted differences in their visual organs, mouth, spotting, leg shape and other features. But there were two major differences that set the new species apart: its legs and eggs.

Researchers confirmed that the new species contains a combination of characteristics from other species and it is likely descended from an ancient element. Tardigrades are believed to remain, and scientists believe that at the end of the world it will be the tardigrades and not the cockroaches that will survive.

(The above story first appeared on LatestLY on Mar 01, 2018 05:09 PM IST. For more news and updates on politics, world, sports, entertainment and lifestyle, log on to our website latestly.com).