No Sunrise Till 2021 In Alaskan Town, Utqiagvik! Know All About Polar Nights That Brings Near-Darkness in This American Northernmost Town 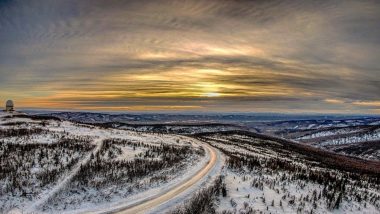 Residents of America's northernmost town, Utqiaġvik, Alaska – formerly known as Barrow, will witness a phenomenon where the sun doesn't rise above the horizon for more than 24 hours. It set at 1:30 PM on Wednesday and won't rise for the next 66 days in Alaska. The natives of Alaska are not worried about this phenomenon as it is a regular one that happens annually. The National Weather Service in Fairbanks on Wednesday said the sun will not rise again until January 23 in Utqiaġvik, an Alaskan town. The polar night occurs in the northernmost and southernmost regions of the Earth, when the night lasts for more than 24 hours. This occurs only inside the polar circles. Last Chance Tourism: From Great Barrier Reef to Machu Picchu, 7 Places People Are Visiting Before They're Lost Forever Due to Climate Change!

Some Alaskans prepare for this time period by taking Vitamin D supplements. According to Time and Date, the polar night happens each winter due to the tilt of the Earth's axis and "none of the Sun's disc is visible above the horizon at all". It only happens within the polar circles. Meteorologist Danielle Banks of The Weather Channel was quoted as saying, "There are a few hours each day with enough light to see, but the folks who live here have technically seen their last sunset until 2021." On First Day of Summer, Netizens Flood Twitter Timeline With Gorgeous Sunrise Views.

(The above story first appeared on LatestLY on Nov 19, 2020 01:09 PM IST. For more news and updates on politics, world, sports, entertainment and lifestyle, log on to our website latestly.com).