Perks of Being a Millennial: Woman Forgets Passport at Hotel, Internet Collectively Helps Her Retrieve it

She forgot her passport at a hotel in Kyoto and had left for Tokyo airport to catch a 6:30 pm flight. The adventure begins there! 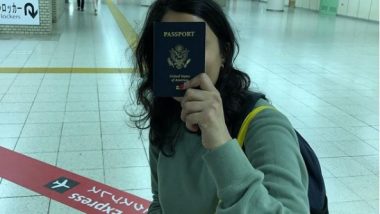 How terrible is the feeling when you reach your pockets for the phone and it is not there? A mini-attack you would want to call it? Well, then what would you describe the panicky situation when you realise that you are heading towards the airport leaving your passport in a hotel room? Last week, a woman with the Reddit name bibimbopbop reached out to the internet in a desperate attempt to get her passport back, here we take you through her journey to retrieving her passport with the help of internet.

She forgot her passport at a hotel in Kyoto and had left for Tokyo airport to catch a 6:30 pm flight. She was half way when she realised her passport was not with her. Trying her luck, she took to Reddit asking if anybody was planning to go to Tokyo in some time. She was also willing to compensate the person turns out to be a Good Samaritan.

The woman who wished to remain anonymous posted a Reddit thread saying, "Hello, being a complete idiot I left my passport in Kyoto at a hotel and now I have a flight from Tokyo narita at 630pm. Is there anyone that happens to be coming back to Tokyo in the next few hours that I could meet at the airport or anywhere in Tokyo? Such a long shot but I would eternally grateful and willing to compensate!!"

Her comment was quick to receive thousands of up-votes on the Japan Travel Reddit. And one of them was Reddit user OneForkShort, whose real name is Vincent Maggio who took the matter ahead. He posted asking, "What hotel. I'm in Osaka with nothing to do today and I feel like an adventure."

Here, he collects the documents from the hotel

So, I’ve only just been able to sit and post something, so we have a few updates. The Documents have been acquired!!

There's 318.6 miles to Tokyo, we've got a full iPhone battery, a whole pack of cheese and sausage, it's light out, and I’m wearing sunglasses.

Travel + Leisure quoted Maggio as saying "I really had nothing else to do that day, and someone needed help. It's that simple. When the help request popped up on my Reddit feed, I was actively trying to think of something to do that day that would be fun but let me avoid the crowds. The [poster] did me a favor honestly."

Some dramatic music for company

This is Karasuma station in Kyoto, I had to transfer subway lines to get to Kyoto station. I’m not sure what’s going on, but this is some dramatic music for my little adventure eh?

Meanwhile, the woman called up a friend to tell the hotel to set up the drop. All set for the adventure, Maggio left for the airport with Reddit users all praying for a positive outcome. Documenting his adventure, Maggio wrote on his Instagram, "If I make the 1:19 Shinkansen to Tokyo, I’ll get there at 3:35. Her flight leaves at 6:25, so she should have plenty of time believe it or not,” Maggio wrote on Reddit.

He then updated everyone saying, "Alright redditors, the adventure begins. I’m on the limited express from Kyobashi to Kyoto. Minutes after he said that, he shared some bad news with the Reddit thread. His wrote, "Ummmm so do you want the good news or the bad news? Bad news: I'm not going to make the 1:19 to Tokyo." He then added, "Good News: Because I’m on the 12:35."

Finally, the moment has arrived everyone has been waiting

And guess what? The woman got her passport delivered well before time. Thanking the man, bibimbopbop wrote on the Reddit thread, "This dude was so stand up that after thanking him profusely he acted like he had barely even done me a favor." To which Maggio replied saying it was not a big deal and he was glad that he could help someone. He wrote, "I was just doing someone a favor that was fun for me too. It was certainly no chore. I’m really happy a bunch of people got to see the photos from the journey."

(The above story first appeared on LatestLY on Apr 08, 2018 02:20 PM IST. For more news and updates on politics, world, sports, entertainment and lifestyle, log on to our website latestly.com).