Pet Saves Woman From Abusive Boyfriend by Biting Him Hard, Other Times When Dogs Helped Women From Similar Abuse Situations

A woman's boyfriend had punched her in the face hard hurting her, until her pet Staffordshire bull terrier Staffie who bit the guy so hard, he had to be taken to an infirmary. We also give you other similar instances where pets helped their owners or strays helped women to escape from such tough situations. 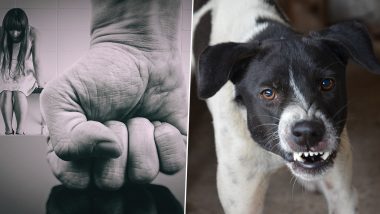 Having a dog around can be a good thing, not just are they cute companions but their protectiveness can be life-saving. Dogs have an instinct to recognise sense of something bad that can happen and can turn ferocious in times of need. In a recent example from Scotland, a woman was saved from her abusive boyfriend by her angry bull terrier pet who stepped in their argument. The woman's boyfriend had punched her in the face hard hurting her, until her pet Staffordshire bull terrier Staffie who bit the guy so hard, he had to be taken to an infirmary. We also give you other similar instances where pets helped their owners or strays helped women to escape from such tough situations. Pets are Lifesavers! 5 Times Videos of Cats and Dogs Saving Human Lives Went Viral.

In this recent case from Aberdeen, Liam Gove, the abusive boyfriend had first hit the dog before he turned at his girlfriend. The two had gotten into an argument about Liam stepping out somewhere in the middle of the night. Liam lost his cool and ended up punching his girlfriend twice and left her nose bleeding. That's when Staffie, the pet intervened and bit him so hard, he had to spend two days in the hospital just cleaning up the wounds. As reported by Metro UK, the incident had taken place in March last year but the court has ordered him two years’ supervision, ordered him to complete the Caledonian programme and gave him 300 hours of unpaid work.

In another case from Mumbai's Powai in October 2020, a dog saved a woman from a shirtless stalker. A man allegedly entered the woman's house in the wee hours of the morning, when the dog barked and alerted her. She then raised an alarm, which led to the man fleeing away. The man was arrested by the police. Three-Legged Dog Rescues Newborn Baby Buried Alive by Teenage Mother in Thailand Village.

In the past too, dogs have helped save the life of many children. Back in 2018, in Madhya Pradesh's Sagar district, a pet dog saved a 14-year-old from getting raped. The victim was kidnapped and being taken elsewhere, when the pet dog attacked the accuser. The girl managed to free herself and fled from the spot.

There have been instances where even stray dogs have acted as life-savers for some people. Back in 2017, a video went viral from UK, where a woman was about to get mugged but a stray dog came to her help. A woman was being followed by a mugger and when he attacked the woman, the stray nearby went on to bite him. The mugger fled from the scene as the dog continued to bark.

There have been other instances when dogs have even protected their owners from attacks of other animals. Dogs have lost their lives in protecting their owner from snake bites even. These instances are great examples of why dogs make the best companions and truly live up to the tag of Man's best friend!

(The above story first appeared on LatestLY on Jan 20, 2021 04:57 PM IST. For more news and updates on politics, world, sports, entertainment and lifestyle, log on to our website latestly.com).