Pi Day 2019: Know All About the Day As Math Jokes and Funny Memes Flood Internet 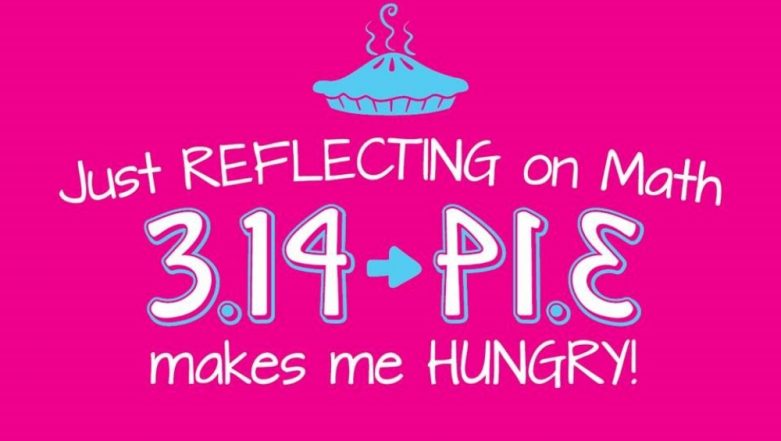 It's Pi Day and Albert Einstein's birth anniversary today and social media can't keep calm about how nerdy the day looks. Pi Day is celebrated annually on March 14 denoting the numbers 3, 1 and 4 (3/14 in the month/day format) present in the value of π. The day celebrates the mathematical constant which represents the ratio of the circumference of a circle to its diameter. Meanwhile, jokes and memes surrounding Pi Day has flooded the internet. Although maths and science jokes may not be everyone's cup of tea, Twitter is trying to engage everyone with the silliest of memes celebrating Pi Day.

Pi Day is popularly celebrated in the West and is often celebrated with pies. Pie-eating contests and pie-making classes are quite popular on this day. Cake shops come up with big discounts on pies and even come with different events to engage customers. Online sites also various offers on pies. Happy Birthday Albert Einstein: 5 Kids With Higher IQ Than the Genius Physicist.

Check out memes and jokes on Pi Day:

Made a math joke for Pi day- Why couldn’t the plane extend on in two dimensions?  Because it was in a Pentagon  :O

Reminder to self: Tomorrow is Pi Day. pic.twitter.com/zwiHO8Mng0

Because, Pi is Pie is love

Are you ready for some Pi this Thursday? What are your favorite Pi day activities? #PiDay2019 pic.twitter.com/WLmI2AonrE

When your math teacher realizes Pi Day is this week!!! #piday2019 pic.twitter.com/aUgiit9xNb

Here's all the inspiration you need in life

Pi can actually be calculated to over one trillion digits beyond its decimal point. This uniqueness of this mathematical denomination has often resulted in discussions, talks, debates and even has references in popular culture including movies and comics. As Pi is an irrational and transcendental number, it continues infinitely without repetition or pattern. Hence for normal calculations, only a few digits are used. Its infinite nature also has been the subject to various memorising competitions also. FYI, Albert Einstein's birthdate was born on March 14, 2018, which is the same as Physicist Stephen Hawking's death date.