The Pope's official Instagram account recently 'liked' a racy picture of bikini model Natalia Garibotto was wearing a revealing outfit. She wore a crop top, stockings and suspenders, showing off her curves. When a Twitter user pointed it out, social media went into a frenzy, some giving out very funny reactions. 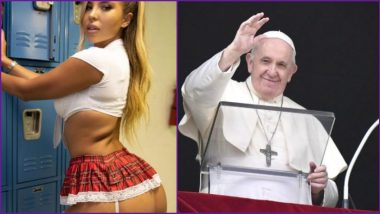 If you too rubbed your eyes in disbelief, join the 'How Do I Unsee THIS' club ASAP! Yes, yes, yes, we all have heard it too many times, once something is on the internet, it is hard to take it off. And netizens have some really careful eyes. Some keen observers found out that Pope Francis' official Instagram account had 'liked' a very unlikely picture. An OnlyFans bikini model's photo was recently 'blessed' by Pope Francis! And this was none other than Natalia Garibotto whose picture in a very revealing outfit was recently like by Pope's official Instagram account. The bikini model wore a crop top, stockings and suspenders, showing off her curves. When a Twitter user pointed it out, social media went into a frenzy, some giving out very funny reactions. But the model has the cheekiest reaction to this 'like.' So, if there is someone who is on cloud nine today, it definitely has to be Natalia Garibotto. The OnlyFans model is basking in the limelight and how! In September, Pope Francis' statements of eating food and sex are 'simply divine' went viral.

Pope Francis joined Instagram in 2016 and has about 7.3 million followers. The account is not following a single account. Now it could be the Pontiff's staff member who would have double-tapped but it has been noticed! And soon after the news spread across social media, the 'like' was gone. But the careful users have saved the screenshots and now it is for everybody to see. Natalia Garibotto is obviously happy with this one 'like' on her photo, leaving out the lakhs of others, since the picture has now gone viral. Talking about this 'like' she told Barstool Sports, "My mum may hate my ass pics but the Pope be double-tapping." She even tweeted cheekily, "At least I'm going to heaven." Pope Francis Voices Support For Same-Sex Civil Unions in Documentary Film 'Francesco'.

Here's The Model's Racy Picture Which Was Liked by Natalia Garibotto:

they caught The Pope in 4K pic.twitter.com/nvkzekdkHM

Social media users some funniest reactions. One wrote, "it just means that your ass is divine." Another one mentioned, "Now that's my kind of Pope." The like is no longer there, so it is more likely an mistake from any of the staffers who manage the account.

(The above story first appeared on LatestLY on Nov 18, 2020 10:14 PM IST. For more news and updates on politics, world, sports, entertainment and lifestyle, log on to our website latestly.com).