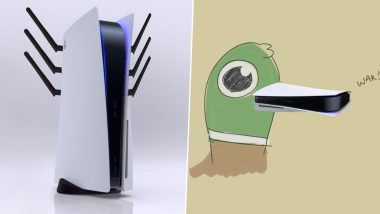 Sony revealed the new PlayStation 5 console at the launch event last night and gamers couldn't be happier. As their favourite gaming console comes in with the newest games, people are also loving the new look and design of it... to make funny memes and jokes! The black and white sleek console may carry a futuristic appeal for some, but for others, it looks like a fancy router or desktop computer! Internet is the best at reacting with funny memes and jokes be it anything that trends and so PS5 are no different. Sony PlayStation 5 Gaming Console Revealed Featuring Spider-Man: Miles Morales, Gran Turismo 7, Resident Evil 8 & More.

The PS5 console has a black core with curved white edging and a blue glow. The company showcased two models at the launch - a regular one with a 4K Blu-Ray drive & a Digital Edition that doesn't include the disk drive. It has a 16GB GDDR6 RAM, a solid-state drive, supports 8K graphics, 4K graphics at 120Hz refresh rate, 3D audio & compatibility with PS4 games. But for some all that does not matter, but just that it can fit into several memes and jokes. Latest Meme Templates For Free Download: From Hera Pheri Dialogues to Coffin Dance Video, These Meme Formats Will Help You Make Funny Jokes.

It's a Desktop Computer

Haha or a Ship

We Didn't See That Coming

The P in PS5 stands for Pope pic.twitter.com/4S3zJ8NRLZ

Spot the difference between the PS5 and Router. #PS5 pic.twitter.com/rqGWC5K5FG

Or is it a Fridge?

What do you think? The memes are just hilarious, right? The more and more we look at the memes, we can't help but think of it as a router.

(The above story first appeared on LatestLY on Jun 12, 2020 10:46 AM IST. For more news and updates on politics, world, sports, entertainment and lifestyle, log on to our website latestly.com).