In a tragic incident, the celebrations of Raksha Bandhan 2021 turned sour in Bihar's Chhapra after a man, who tried to tie rakhi to snakes, died after the reptile bit him. Though he was rushed to the hospital but died while undergoing treatment. 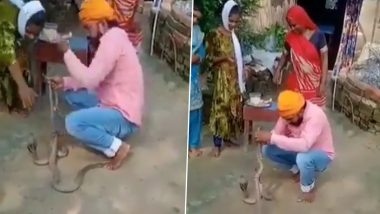 Patna, August 23: People across India celebrate the festival of Raksha Bandha with great jest and zeal to honour the bond between brothers and sisters. But in a bizarre incident, a man tried to celebrate his bond with snakes this Rakhi. Reports inform that a snake charmer from Chhapra in Saran district of Bihar, tried to perform the Rakhi-tying ritual with a snake. However, it soon turned tragic and he was rushed to the hospital after the snake bit him. Two-Headed Snake Swallows Two Mice Simultaneously, Viral Clip Will Send Chills Down Your Spine (Watch Video).

In a video that is going viral on the social media platforms, the snake charmer can be seen holding two snakes by their tails. While he was trying to put 'Tika' on one of the snakes, the other crawled slowly towards him and bit his foot. The man, who seemed to be rather clam in the video, was hospitalised after the snake bite. Zee Bihar Jharkhand reported that the man died during treatment at the hospital. Bihar Shocker: Drunk Man Chews Baby Snake in Revenge After It Bites Him on His Leg in Nalanda, Dies Next Day.

The man was reportedly fond of snakes and used to cure people of snake bites as well. This Raksha Bandhan he decided to tie Rakhis to the snakes, but it soon turned tragic as one of the snake bit him. Many people had gathered around the place to watch the snake charmer do the Rakhi-ceremony with the snakes, as can be seen in the viral video.

(The above story first appeared on LatestLY on Aug 23, 2021 10:22 AM IST. For more news and updates on politics, world, sports, entertainment and lifestyle, log on to our website latestly.com).