One visitor in Malaysia's Negara zoo was not for a pleasant view. He took a few pictures and also a video of the rats scurrying around the food plates of the penguins. After they were shared on Facebook, they went viral, and netizens were enraged. 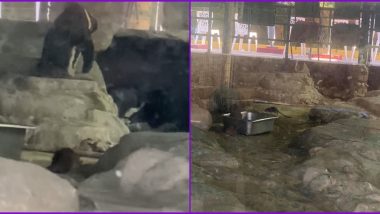 After the lockdown, people would enjoy visiting parks and zoo, but one visitor in Malaysia's Negara zoo was not for a pleasant view. Usually happy to see the penguins, the man was in for a shock when he saw it infested with rats. He took a few pictures and also a video of the rats scurrying around the food plates of the penguins. After they were shared on Facebook, they went viral, and netizens were enraged. People questioned the zoo authorities over their regular donation posts and what have they been doing with the money. Penguins Roaming Freely in Chicago Aquarium After It Got Closed Due to Coronavirus Delight Netizens (Watch Video).

A Facebook user Li Junhao visited the Negara zoo about two days ago when he saw the miserable situation. He saw rats in the penguin enclosure on August 10 and took a video of it. In the clip, the rats appear to be munching some food from the tray kept for penguins. Junhao posted the pics and videos online, and they went viral. Some questioned how can there be mice inside, given that the temperatures should be low. Penguins survive in naturally lower environments, so the enclosures are specially made, to control the temperature levels. At those temperatures, rats should not be in there. Video of Orangutan Smoking Cigarette in Indonesian Zoo Goes Viral, Sparks Debate on Animal Protection.

People were pretty disappointed with what they saw. In fact, some of them commented on their own experience of seeing the sad state of animals in here. Someone noted that, "There are rats, which means it's not cold inside, how bad the living environment of penguins is." Others commented claiming that the zoo is continually asking for donations so where does the money go, if the situation is so wrong! On continuous questioning, the zoo addressed the comments that it is working to address the concerns. It is really a sad state to see, one of the precious and exotic species is being treated so badly in enclosures.

(The above story first appeared on LatestLY on Aug 12, 2020 01:56 PM IST. For more news and updates on politics, world, sports, entertainment and lifestyle, log on to our website latestly.com).