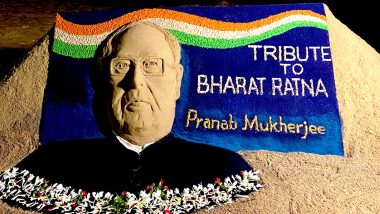 Rest in peace, Pranab Mukherjee. The former President of India, passed away on August 31, 2020. The nation lost a significant leader, and many call it an end of an era. A stalwart and statesman, Mukherjee, fondly known as Pranab Da, was 84. Many took to social media to mourn the sad demise of the politician. Renowned sand artist, Sudarsan Pattnaik also paid his honour to former President with beautiful sand art on Puri Beach, Odisha. The portrait of Mukherjee using sand, Pattnaik rightly captured every citizen emotion about the former President’s sad demise. As the nation bid farewell to the Bharat Ratna awardee, in this article, we bring you the picture of Pattnaik’s sand art as he paid his tribute to the great politician.

Mukherjee passed away on Monday, August 31, 2020. His son Abhijit Mukherjee confirmed his death. It is tragic news for the nation. The last rites were paid by his family members, and many political dignitaries attended the funeral. On the other hand, citizens took to social media to pay their honour as the country mourned his death. Pattnaik created the sand art at Odisha’s Puri beach. “My SandArt at Puri beach with message Tributes to Bharat Ratna #PranabMukherjee, former President of India. #OmShanti,” reads the caption of his tweet. He also added words, “Tribute to Bharat Ratna Pranab Mukherjee,” to his sand art, and added some fresh flowers in his sand art to pay his tribute to the former President of India. Pranab Mukherjee Dies: From Campaign Manager to President of India, A Look At The Political Rise of The Congress Stalwart And Bharat Ratna.

View Pic of the Sand Art:

Pranab Mukherjee was suffering from a prolonged illness. He was in a deep state of coma because of the complications following a lifesaving surgery. Mukherjee served as India’s President between 2012 and 2017 and his career as a politician spanned over five decades. A great leader, Pranab Da, will always be remembered and honoured because of exemplary and notable contribution to the development of the nation.

(The above story first appeared on LatestLY on Sep 01, 2020 06:55 PM IST. For more news and updates on politics, world, sports, entertainment and lifestyle, log on to our website latestly.com).