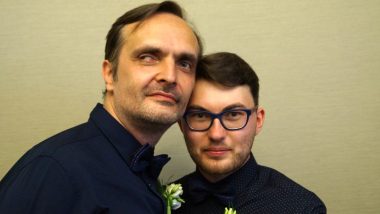 Russia seems to have recognised a gay marriage unknowingly. The claim surfaced after the send a tax return to a prominent LGBT rights activist who had married his husband in the United States. Russian LGBT Network director Igor Kochetkov took to Facebook revealing that he received a tax deduction from Russia's Federal Tax Service on his husband's behalf earlier this month. Interestingly, this is not the first time Russian officials recognised a gay marriage because of the existing laws in the country's family law. LGBT Activist Keshav Suri, Co-Owner of Lalit Hotels Dresses in Drag and Dances With His Mother (Watch Video)

While Russia does not register same-sex marriages, the Russian family law recognises marriages that were registered abroad as long as they are not between close relatives or already married people. On the three-year anniversary of his marriage to activist Kirill Fyodorov, Igor Kochetkov took to Facebook in a long post writing, "The state made this tax deduction and has thus recognized our marriage." He adds, Since neither of us is in another marriage, we’re not close relatives, adoptive parents or adopted children… our marriage is recognized in Russia." Pride Day 2020 Date: History, Significance and Celebrations to Observe This Revolutionary Day, Marking the Start of LGBT Pride Month in June

(The above story first appeared on LatestLY on Jun 24, 2020 12:55 PM IST. For more news and updates on politics, world, sports, entertainment and lifestyle, log on to our website latestly.com).