Joe Biden, the Democratic presidential candidate has named Senator Kamala Harris of mixed Black and Indian heritage, as the Vice Presidential candidate. She is currently the US Senator from California. People took to Twitter saying that it is not just a historic moment for Black Americans but also for those from South Asian descent. 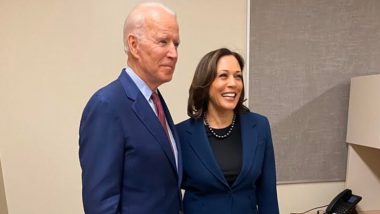 Joe Biden, the Democratic presidential candidate has named Senator Kamala Harris of mixed Black and Indian heritage, as the Vice Presidential candidate, on Tuesday. Leading Indian-American groups across the United States are in praises about the Biden's selection with the announcement being described as historic. The 55-year-old Harris' father is an African from Jamaica and mother an Indian. She is currently the US Senator from California. As the news spread, people took to Twitter lauding the decisions. Twitterati said that it was not just a historic and inspiring moment for Black Americans but also for the people from South Asian descent. Biden Selects California Sen. Kamala Harris as Running Mate.

Making the announcement, Biden took to Twitter saying, "I have the great honor to announce that I’ve picked @KamalaHarris — a fearless fighter for the little guy, and one of the country’s finest public servants — as my running mate,” Biden tweeted. In a text message to supporters, Biden said, “Together, with you, we’re going to beat Trump." Harris is also the first African American of a big party and only the third woman yet to run for that office, after Democrat Geraldine Ferraro and Republican Sarah Palin. A woman has never served as president or vice president in the United States. Kamala Harris 'Nasty, Disrespectful' to Joe Biden, Suprised by VP Pick: Trump.

Back when Kamala was Attorney General, she worked closely with Beau. I watched as they took on the big banks, lifted up working people, and protected women and kids from abuse. I was proud then, and I'm proud now to have her as my partner in this campaign.

.@JoeBiden can unify the American people because he's spent his life fighting for us. And as president, he'll build an America that lives up to our ideals.

I'm honored to join him as our party's nominee for Vice President, and do what it takes to make him our Commander-in-Chief.

I’ve known Senator @KamalaHarris for a long time. She is more than prepared for the job. She’s spent her career defending our Constitution and fighting for folks who need a fair shake. This is a good day for our country. Now let’s go win this thing. pic.twitter.com/duJhFhWp6g

With this step, Biden is walking in hands with his former rival from the Democratic Party. However, she dropped out of the race in December 2019 and endorsed Biden in March. Harris won her first election in 2003 when she became San Francisco’s district attorney. She was elected California’s attorney general in 2010, the first woman and Black in the position. She is married to Doug Emhoff and is stepmother to Ella and Cole Emhoff.

.@KamalaHarris will be a great partner to @JoeBiden in making our government a powerful force for good in the fight for social, racial, and economic justice. pic.twitter.com/q5ggXBro5B

I'm thrilled to welcome @KamalaHarris to a historic Democratic ticket. She's already proven herself to be an incredible public servant and leader. And I know she’ll be a strong partner to @JoeBiden. Please join me in having her back and getting her elected. pic.twitter.com/cmtOO8Gqqv

An Inspiration to Many Young Women:

Dear @KamalaHarris I told my niece Amani that a woman that looks like her just made history... She’s excited! Thank you for showing little girls that if there’s not a seat at the table, to bring your own. #BidenHarris2020 pic.twitter.com/GdO1JvVNVd

Support Flowing in From All Quarters:

It’s time. The world is watching- and so are we. Write @kamalaharris into history – because she is qualified, deserved, and in this moment prepared to lead. We expect what America deserves. Visit… https://t.co/FyYGbso4bf

People Rooting For the Black Woman:

The naming of Kamala Harris has had a huge effect on the general mood of the US population at large!!

I can’t remember any previous VP announcement that was so uplifting to Americans!

The energy she brings to the campaign will prove to be invaluable!!#BidenHarris2020

The Biden campaign said in a statement, "From her track record of managing through multiple crises to standing up for the people who need it most, Joe knows that Kamala will be ready to tackle the work that is needed to heal our country on Day One of the Biden-Harris Administration."

The statement added, "Joe Biden is running to restore the soul of the nation and unite the country to move us forward. Joe knows more about the importance of the Vice Presidency than just about anyone, and he is confident that Kamala Harris will be the best partner for him to finally get the country back on track."

(The above story first appeared on LatestLY on Aug 12, 2020 08:11 AM IST. For more news and updates on politics, world, sports, entertainment and lifestyle, log on to our website latestly.com).