Slice at the Sky! Texas Skydivers Eat Pizza As They Freefall Towards the Ground From 14,000 Feet, Incredible Video Will Make You Go Whoa!

An amazing video surfaced on the internet showing four skydivers, filming themselves eating a pizza in freefall after jumping from 14,000 feet. Whether you have a fear of height or utter love for pizzas, this incredible video will surely make you go whoa! 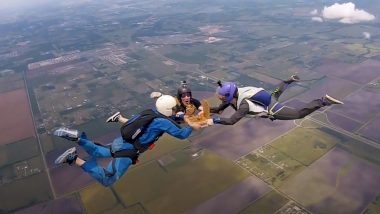 How crazy are you about pizzas? Each bite of it may take you to heaven, but these skydivers enjoyed a slice at the sky. Quite close! An amazing video surfaced on the internet showing four skydivers, filming themselves eating a pizza in freefall after jumping from 14,000 feet. That’s one pie-in-the-sky idea! The Texas skydivers spent days practising in the sky above Houston, before they finally did it! All four of them proved that there isn’t any bad time to indulge in a slice of Margherita. Whether you have a fear of height or utter love for pizzas, this incredible video will surely make you go whoa!

Pizza is a worldwide loved food, and there is no less viral content related to it. But who would have thought a slice could be literally enjoyed at the sky? 43-year-old, Lori Patalocco, with three others, decided on the sky-high pie plan. The daredevil reported that her friend, Melissa, loved pizza and wanted to test if she could eat a Margherita slice while skydiving. After practising the same for a few days, at the Houston’s Skydive Spaceland, the crew decided to give it a try.

The viral video shows the four people forming a circle around the pizza in mid-air and calmly tucked in as they plummeted towards the ground. The person filming, opened the box, pulled out a pizza slice and put it into one of the other’s mouth. It is not easy. Looking at the video, one can imagine how difficult it can be, moving in the air, with the person filing just holding a pizza slice while falling. Miraculously, only one piece flies up out of the box during the tricky manoeuvre. Best Skydiving Spots in The World: From Nepal to Brazil, 5 Places to Experience The Beauty of The World From Up Above.

Watch Video of Skydivers Eating Pizza at the Sky

It looks fun, but challenging at the same time. After all, the crew practised it for days, before finally attempting it. The team’s high-altitude yearnings have been sated by the stunt, safely.

(The above story first appeared on LatestLY on Feb 27, 2021 06:50 PM IST. For more news and updates on politics, world, sports, entertainment and lifestyle, log on to our website latestly.com).