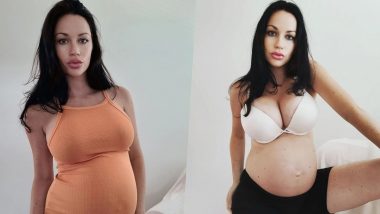 Teacher-Turned-OnlyFans Star aka XXX model for the 18+ platform is pregnant with her ex-student's baby. She has recently admitted that she was unaware that the person she met in a bar and had sex with was one of her former students. She previously gained notoriety for referring to herself as a "proud mistress" and after having a long-term relationship with the child, who is now a college student in North Carolina, Amy Kupps revealed she was expecting. The child is now 22 years old. The model announced on Instagram that she would be documenting the delivery and sharing it via live stream.

Amy claimed that she didn't realise who the youngster was until he addressed her as "Miss Kupps." Amy, who is expecting a child in three months, is currently planning to raise the child alone. She was previously married, but it was allegedly her spouse who revealed her.

Earlier, she was married, but it was reportedly her husband who outed her. While speaking to Nudepr.com, Amy said: "I'm doing it so I can share the experience with my fans. I'm going to get help from the midwife with filming." She further said: "The gender will be a surprise as I don't want to know until the baby is born. But I think and hope it's a girl. The baby should be here at the end of October or early November."

Sharing further details in an Instagram post, Amy wrote: "This may come across as a controversial post and rightfully so! Being a former teacher I miss some aspects of the job such as giving knowledge...besides my former curriculum I've also studied health & science, so I'm announcing to everyone that I will be filming the birth for educational purposes on my website."

(The above story first appeared on LatestLY on Aug 17, 2022 11:27 PM IST. For more news and updates on politics, world, sports, entertainment and lifestyle, log on to our website latestly.com).