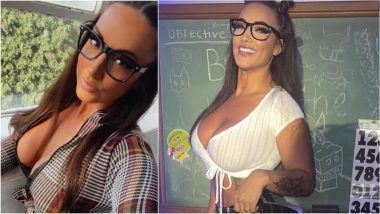 "Dinners and meals were always things I could throw together. One week, we only had $20 to feed our family of six and three dogs! It was hard, but we always made it work. This year for Christmas my kids (ages 8-20) will be getting a VR set, electric scooters, dartboard, Harry Potter robes and wands," she revealed. In 2016, Courtney made the difficult decision to leave her teaching position and pursue a career as a life coach because she claimed it had caused her to feel "depressed, worried, and even angry." She is not the only teacher who has become a part of the headlines. Just recently a XXX OnlyFans Star & Teacher Miguelina Fredes’ hot pics were leaked on social media and refused to leave her teaching position after the concerned parents wanted her fired!

2019 saw the beginning of her OnlyFans career, which has now brought her 25,000 subscribers over two pages. She could make anything from $40,000 to $100,000 each month as a result. Because of her success, the mother has been able to spend her first-ever six-figure paycheck on her children, spending about $5000 on them for Christmas this year. The mother reportedly intends to give her kids pricey Jordan trainers, "many other things," and "celeb-approved" workout attire from Alo Yoga. In addition to being able to treat her children, the mother claims that around the holidays, her family tries to give to people in need. The model expressed the desire to travel more with her family and stated she might see herself buying investment homes in the future.

(The above story first appeared on LatestLY on Dec 01, 2022 10:09 PM IST. For more news and updates on politics, world, sports, entertainment and lifestyle, log on to our website latestly.com).