Terrifying! Lebanon Bride, Whose Wedding Photoshoot Was Interrupted by Massive Explosion in Beirut, Says 'Lucky to be Alive' After Dramatic Video Goes Viral 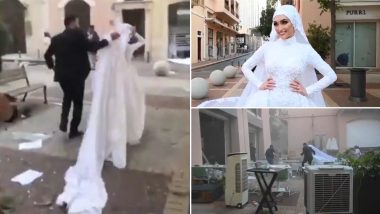 A bride who was on the streets of Beirut on Tuesday for her wedding photoshoot got the shock of her life. Dr Israa Seblani and 34-year-old Ahmad Sbeih were posing for photos at Beirut’s Saifi square when the explosion occurred. The video of the incident which has gone viral shows the Seblani posing in a stunning white wedding gown. As the camera pans to show the veil of her white gown, a thundering explosion occurs in the background. Things seem to have toppled down in a brief moment. Following the incident, the bride said that she was lucky to be alive. Beirut Explosion: Burj Khalifa And Egypt's Giza Pyramids Lights Up in Colours of Lebanon Flag in Solidarity With Victims.

Seblani was quoted as saying, "I feel so sad about what happened to other people, about what happened to Lebanon. When I woke up and saw the damage that happened to Beirut, the one thing I said was thanking God we are still alive." Seblani is a doctor working in the United States had arrived in the city three weeks ago for her wedding. The couple were so shocked by the incident that a day later they are still processing to understand what happened. Lebanon's Deadly Beirut Blast: Video of Father Doing his 'Absolute Best' to Protect His Son After Their House Shudders Due to the Massive Explosion Will Break Your Heart.

Seblani is a doctor working in the United States had arrived in the city three weeks ago for her wedding. The massive explosion that rocked the Lebanese capital killed at least 135 and left 5,000 injured. Mahmoud Nakib, the couple's wedding photographer, captured the moment the explosion occurred. Subeih later went to their hotel on Wednesday which was completely damaged to retrieve belongings and passports. He has been waiting for a visa to the United States to join his wife. However, Seblani loves Lebanon, but now after the scary incident, they don't want to stay there.

Talking to CNN, Seblani was quoted as saying, "The area I was in -- within matter of seconds -- it went from beautiful place to ghost town filled with dust, shattered glass and people yelling [and] bleeding. It was like a nightmare scene."

The intensity of the explosion nearly knocked them down. The shockwave pushed the photographer Mahmoud Nakib down and send the camera rolling for capturing a few seconds. As the blast occurred, the wedding guests went inside. Fortunately, nobody none of them was injured. The explosion in Lebanese capital destroyed the city and displaced thousands of them. The explosion occurred due to tons of unsecured chemical compound stored unsafely in a warehouse. The country has declared three days of mourning from Wednesday.

(The above story first appeared on LatestLY on Aug 06, 2020 01:41 PM IST. For more news and updates on politics, world, sports, entertainment and lifestyle, log on to our website latestly.com).