Tropical Storm Fay Makes Landfall in New Jersey: Twitterati Share Pics and Videos of Flooded Streets As Well As Funny Memes to Seek Respite From Another Crisis in 2020 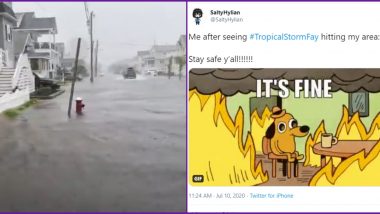 A tropical storm warning was issued for parts of the US. Called the Tropical Storm Fay it has made landfall in New Jersey. The result was downpours along the East coast and flooding in several states including New York, New Jersey, Maryland and Delaware. The storm made its landfall near Atlantic City, New Jersey and soon pictures of the floodings in different parts were shared on Twitter. Several roads were also closed as flash flood warnings were issued. It is another crisis to get through along with coronavirus, some people took respite by sharing funny reactions and GIFs. #TropicalStormFay is thus trending on Twitter with a mix of updates from different regions and some funny meme reactions.

The storm had winds at the speed of about 45 mph but it weakened later. The storm moved through southeastern New York and western New England. Warnings of minor flooding have been issued and people are advised to stay indoors. As the storm brought heavy rains and flooded some streets, people took to Twitter to share pics and videos. For others, it was just another crisis that we are dealing with in the year 2020, so there were funny reactions. Something similar to what we saw when huge African duststorm gathered over the US last month.

Street flooding this AM from heavy rain (not tidal) #Fay #StoneHarborNJ pic.twitter.com/wtQPn8HauI

Leaking on the Subway

Cars Are Drowning in Newark

Not one week later and I once again live in a lake. #Newark NJ flooding is back thanks to #TropicalStormFay - this really really needs fixing 😑@CityofNewarkNJ. pic.twitter.com/3TMWMZwM74

The lobby of our building.😳😳😳

And some people came up with the funniest GIFs and reactions to the news of this storm.

People Not Bothered About the Storm

Hardened by 5 months of confinement

How it Feels Now

Me after seeing #TropicalStormFay hitting my area:

Fully Stocked to Deal With This

#TropicalStormFay come in 2020. Just pour it on. My cabinet's fully stocked until 2021.😜😂 pic.twitter.com/1kYGMKlFf4

My reaction when a tropical storm is headed for NY, and I’ve survived until July 2020 thus far... #TropicalStormFay pic.twitter.com/INHRYcyRou

So people seem to be totally prepared to deal with this crisis today, at least some of them. The storm was expected to bring 2 to 4 inches of rain, with the possibility of flash flooding in parts of the mid-Atlantic and southern New England. President Donald Trump had assured the public that the storm is being monitored and the Federal Emergency Management Agency was poised to help if needed.

(The above story first appeared on LatestLY on Jul 11, 2020 10:13 AM IST. For more news and updates on politics, world, sports, entertainment and lifestyle, log on to our website latestly.com).