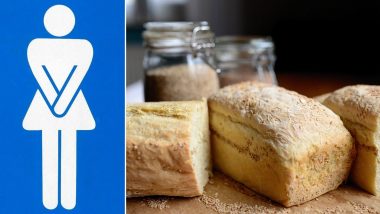 As bizarre as it may sound, there are surprisingly many food items made out of excrete. In spite of all your best efforts to only eat good quality and hygienic food, you have been exposed to certain products that you would not have even imagined touching. Take Luwak coffee, for instance; the beans are made out of cat’s poop. Now another stream of wheat will boggle you up! According to reports, an enterprising French baker is making her goldilocks bread recipe or ‘reci-pee’ by using wheat fertilised with female urine harvest from public restrooms. Yes, as disgusting it might sound, she is actually doing it as to her ‘urine is a great fertiliser,’ and that is why she regularly gathers female urinals from public toilets. Believe it or not, there is a science behind her bizarre reci-pee. From Semen to Bird Poop, Weird Skin Masks and Treatments That Are Sure to Gross You Out.

Engineer and self-proclaimed, ‘ecofeminist, Louise Raguet, regularly collects piddle from female urinals in the 14th Arrondissement of Paris. She makes the Goldilocks bread. Another reason that Raguet uses urinals is that she wants to break the taboos over excrement. According to her, urine is a great fertiliser, and she wants to encourage a sustainable food cycle. “When you pee in water, treatment plants remove the nutrients,” she was quoted saying in reports. “They do not return to the earth. The system is not circular,” Raguet added.

Believe it or not, there is actual science behind the method. As per a study published by the French Urban Planning Agency, some 29 million loaves of urine-utilising bread could be baked daily. The process could save farmers 703 tons of nitrogen employed in artificial fertilizers per day.

Raguet was also quoted in reports explaining, “It’s a neglected liquid, usually dismissed as a waste,” adding that urine harbours nitrogen, potassium and many of the other nutrients that plants extract from the soil. And this is why the French baker believes that urine should be treated like a ‘gold mine.’ To ensure cleanliness, Raguet dilutes the ingredient about 20 times before applying it to the wheat to fertilise the Goldilocks bread. The reason she employs female urines was a part of what Raguet calls, ‘ecofeminism,’ to advocate using eco-friendly products to empower women. She also aims at creating a female urinal called, ‘Marcelle,’ to make it easier for women to pee in public spaces.

(The above story first appeared on LatestLY on Jul 13, 2020 09:11 PM IST. For more news and updates on politics, world, sports, entertainment and lifestyle, log on to our website latestly.com).