Video of Argentinian MP Kissing Girlfriend's Boobs During an Online Parliamentary Session to 'Check Her New Implants' Goes Viral! Politician Steps down After MPs Unanimously Vote for His Suspension 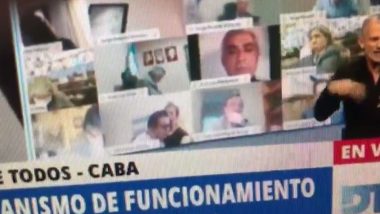 Ever since the pandemic, incidents of politicians leaving the camera on while having sex or other similar activity has increased or let's just say have become for evident. The recent one to join the list is an Argentinian MP who was seen kissing and fondling his girlfriend's boobs while leaving the camera on amid an online parliamentary discussion. He has now resigned after the video of his XXX-tra NSFW deed went viral. He was seen kissing his mistress's boobs during an online parliamentary which he claims is because he wanted to see her new implants. The MP, Juan Emilio Ameri was taking part in a discussion with MPs about debt, when out of nowhere he let his girlfriend Celeste Burgos sit on his lap. Soon he began to pull down her top and kiss her boobs. MPs wasted no time and asked to stopped the session. They demanded his expulsion and also voted unanimously for his suspension. However, now he himself chose to step down. XXX Video of Boss Caught Having SEX With His Secretary on a Zoom Meeting After He Accidently Left The Camera On Is Going Viral!

However, Ameri has revealed he is splitting from his wife and did that because he thought the video was off. Father-of-three Juan Emilio Ameri is now going viral for sexual deed with a pretty blonde. He was seen kissing her right nipple after pulling down her black top. The vote in favour of Ameri's suspension followed soon after Chamber of Deputies president Sergio Massa halted the session. However, it is his bizarre explanation that he was checking the woman's recent boob job is grabbing eyeballs. NSFW Video of Couple Having SEX During Rio de Janeiro Council Zoom Video Conference Goes Viral!

Meanwhile in Argentina: During a virtual Congress session, lawmaker Juan Emilio Ameri pulled down his partner's shirt and started kissing her breasts. pic.twitter.com/qa9MrjUfZK

He told a local radio station about the sex gaffe: "My partner and I are really suffering because of this. I'm very ashamed about what happened and I'm very sorry. The internet connection in the area where I'm based is very bad. My partner was coming out of the bathroom when I thought the connection had gone."

"Ten days ago she had breast enlargement and I asked her about her silicone implants. I asked her if I could give her a kiss and I kissed her on the boobs. That was it." In a statement he sent on Thursday night to Mr Massa after initially refusing to resign his seat, he said: "I'm offering my resignation as an MP. I'd like to offer my apologies for what happened. It wasn't my intention to demonstrate this lack of respect."

(The above story first appeared on LatestLY on Sep 25, 2020 09:31 PM IST. For more news and updates on politics, world, sports, entertainment and lifestyle, log on to our website latestly.com).