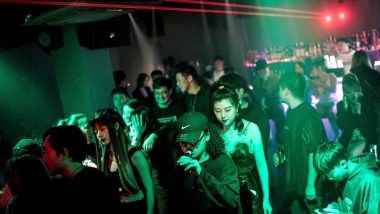 While rest of the world is still struggling with the pandemic of Coronavirus, the epicentre in China, Wuhan has returned back to normal. After pictures of pool party in the city went viral last month, new reports say the regular nightlife has returned. The nightclubs have reopened their dancefloor after no new cases were reported in the city. With no masks and clearly no social distancing, revellers were seen doing the most of it after following months of lockdown. Few pictures from the crowded nightclubs were shared online. The Simpsons Predicted Wuhan Pool Party? Viral Pics Remind Netizens of Similar Scene From The Animated Show.

As per reports in The Mirror, the Chinese government claims it has wiped the virus out and has not reported a case in 33 days. China began opening up the lockdown back in April, when the fears of the spread has gripped around the world. Starting September, schools and universities have also begun. And now nightlife is back too. Young people were seen hanging out all close to each other, with social distancing gone for a toss. People were seen dancing together in the club with nightlife going back to just as normal. Few pictures of the nightclub were shared on Twitter and they will indeed make you jealous. Back when pictures of the pool party went viral, people had started Wuhan vs World memes to show how the situation is everywhere.

Someone even commented that they would like to move to Wuhan as the situation has improved so much. Meanwhile, the world is still struggling with coronavirus, as a second wave is reported in some countries. USA ranks the first with India on the second number. Compared to the other countries, China is on number 42! As per reports, China claims that it has done mass testing in Wuhan for city's entire 11 million population.

(The above story first appeared on LatestLY on Sep 21, 2020 12:34 PM IST. For more news and updates on politics, world, sports, entertainment and lifestyle, log on to our website latestly.com).