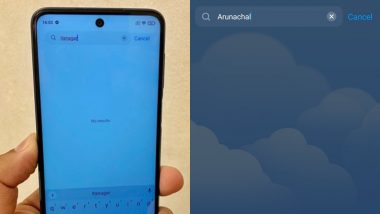 Chinese smartphone company Xiaomi has come under criticisms for not being able to produce results for different places in India's state of Arunachal Pradesh, including its capital Itanagar. People took to Twitter questioning the issue with Xiaomi's weather app that did not selectively show results for some places. People also posted videos and pictures explaining the concern they are facing with the phone. Meanwhile, some pointed out that Xiaomi's sister company OnePlus was still showing results on its weather app. Twitter Removes Precise Location Tagging on Its App.

YouTuber And Technology Blogger Gaurav Chaudhary, known as Technical Guruji, tweeted about the concern or Xiaomi India Head, Manu Kumar Jain. He tweeted saying, "Sir @manukumarjain we all have huge respect for your work. As an Indian I'm sure it's a simple question to answer. Can you please tell us where is Arunachal Pradesh located? #TGFamily RT with #XiaomiJawabDo." As more social media users demanded answers, the hashtag #XiaomiJawabDo (Xiaomi, Give Answer) began trending on Twitter.

Tweet on Xiaomi Not Showing Results For Indian Regions:

Sir @manukumarjain we all have huge respect for your work.

As an Indian I'm sure it's a simple question to answer.

Meanwhile, the issue has brought in political angle to it with people mentioning the company's link to China. People asked the company to respond on the incident at a time of the current faceoff between India and China over Ladakh as well as Arunachal Pradesh.

While talks continue, MEA spokesperson Anurag Srivastava, clarifying India's position in the matter, had earlier said, "Our position on Arunachal Pradesh has also been made clear several times. Arunachal Pradesh is an integral and inalienable part of India. This fact has also been clearly conveyed to the Chinese side on several occasions, including at the highest level."

arunachal pradesh is not showing in xiaomi maps

if chinese apps can be banned why not mobiles@HMOIndia@AmitShah@KapilMishra_IND@abbas_nighat@TarekFatah#XiaomiJawabDo pic.twitter.com/uObDzNoRcd

this is my last xiaomi and i never by this mobile again #XiaomiJawabDo pic.twitter.com/9kRbUol0xQ

I remember studying about Arunachal Pradesh being a part of India!

Meanwhile, Twitter too had faced flak from social media users for showing the regions of Jammu and Kashmir and Ladakh as a part of China. The incident was highlighted by security analyst Nitin Gokhale who said that when he typed Hall of Fame in Leh as location, he received suggestions which showed that J&K as a part of the People's Republic of China. The error in the geographical boundaries between India and China during the time of standoff has resulted in severe criticisms from people on social media against Twitter and Xiamoi.

The armies of China and India are in a standoff since April this year. Around 250 Chinese and Indian soldiers were engaged in a violent face-off on  May 5. The tensions escalated on June 15 as 20 Indian soldiers were martyred in Galwan Valley. The Chinese Army also reportedly suffered casualties in the attack.

(The above story first appeared on LatestLY on Oct 18, 2020 03:38 PM IST. For more news and updates on politics, world, sports, entertainment and lifestyle, log on to our website latestly.com).