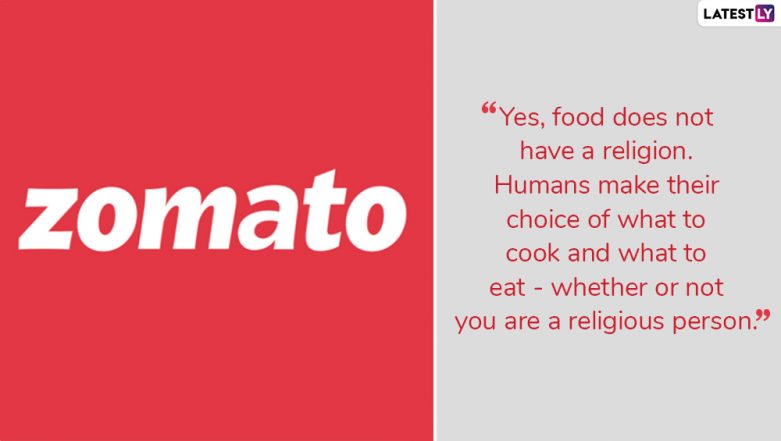 Food delivery app Zomato on Wednesday defended their stand on the policy of using the halal tag by issuing a statement on social media. The app-based food delivery company were criticised on Twitter for taking effort to assist a customer who was wrongly delivered non-Halal dishes, while not helping a customer who demanded a Hindu delivery executive instead of a Muslim. The social media outrage began after Zomato replied to a customer's tweet demanding Hindu delivery guy saying, "Food doesn't have a religion. It is a religion." However, the statement stirred the debate further with the company being slammed all over again for their stand on the topic.

While Zomato's reply impressed many and even garnered the support of their rival Uber Eats, the incident lead to a section of social media users threatening to boycott both the brands. Many also shared screenshots and video of uninstalling the app from their phones and rate them low on Play Store.

Zomato in its statement says, "Restaurants (whether a Muslim establishment or otherwise) serving meat specifically obtain halal certification by an all-India body. Again, we play no role in this categorisation as we only seek proof of authenticity when a restaurant claims to serve halal food. FSSAI license is mandatory. Halal certification is voluntary." Followers of Islam, only consume halal food which has religious significance. Halal meat is prepared by slaughtering the animal and completely draining out the animals' blood, as mentioned in the Quran. Uber Eats Backs Zomato For Standing Up Against Bigoted Customer Who Refused Food Delivery From 'Non-Hindu'.

Zomato said that information on halal food is mentioned so that a customer can make an "informed choice" on what they want to consume. The food delivery app further stated, "Restaurants (whether a Muslim establishment or otherwise) serving meat specifically obtain halal certification by an all-India body. Again, we play no role in this categorisation as we only seek proof of authenticity when a restaurant claims to serve halal food. FSSAI license is mandatory. Halal certification is voluntary."

The company said it took responsibility when customers fail to find a particular food item of their choice on its app "and then mistakenly order a different category of food than what they prefer". The company also pointed out there were no organised units for jhatka meat. In Hindi, Jhatka means swift and reference to animal, it means to say it was killed in a single blow.

However, Zomato's statement was received with more criticisms on Twitter. People accused them of double standards and debates once again kickstarted on the platform.

Here is How Some Twitterati Reacted:

Rather than uninstalling your app. I will make COD orders and cancel it at doorstep. Let's give this shit company some financial losses. Then these zomato people will learn to respect hindu sentiments.#FuckOffZomato#boycottzomato pic.twitter.com/RUu99jxXXA

Accusations Continue to Pour Out on Zomato:

Oh common! You do not have any authenticity of your food being clean n pure. We have received so many videos of your workers who deliver their own tasted food, remember. Your workers ate the ordered food.

Most of them did not seem to agree with Zomato's statement:

Which religion is halal meat and non-halal meat. Please specify!

Some also said that Zomato was preaching about values to a Hindu customer while helping out a Muslim customer with his concerns on food pertaining to his religious beliefs.

And if there is a choice to select Halal food, then why do’t the customer has the choice of delivery man too ?

While many did not agree with the whole incident, reviews for both Zomato and Uber has gone down on Google Play and App Store. Meanwhile, many jokes on Swiggy flooded Twitter with people saying that the rival app is simply watching the whole episode without commenting or taking a stand.